Lately I am all about my Kindle. I had an actual Kindle eReader for a while and then I migrated to using the Kindle app on my iPad and iPhone.

As a writer, I am interested in the people who manage to self-publish and get a little traction on Kindle. As in, who are these people who are making it into the Kindle 100?

As a commuter, I like quick, lightweight and fun reading to pass the time on long BART treks.

With all of this in mind, I went and scoured the Kindle 100 list for downloadable fun. On the top seller list, I found mostly genre books, and most of the genre stuff falls squarely under romance.

Hey, look, cheap romance novels and I go way back. I was reading Harlequin paperbacks when I was in mid-school. My Grandma loved those inexpensive books so much. She’d read one and then my mom, sister and I would pass it around when she was done.

Not much has changed in the romantic genre since moving to Kindle. I looked at all the cheap and tarty romance eBooks and paid anywhere from $1.99 to $7.99 for three different titles.

I have made my way through two of them and am working on the third. I find that immersing myself into this world of genre fiction has sort of tinged my world view. The real world and actual human romantic relationships look a little weird after living in genre world.

In no particular order, what I’ve learned from $13 worth of literary cotton candy:


Everything old is new again.


The basic formula for a good Harlequin romance goes something like this:

There is a dark and brooding man. There is a troubled and innocent woman. Their worlds collide in some fashion. Usually the man is some brash worldly guy like a sea captain or an army general (most Harlequin’s are set in a historical era).

She hates him or he hates her or they hate each other and they fight. He curses the headstrong woman, she alternately loves and hates how manly and forceful he is.

One or both of these characters has a secret. This secret means they can never truly love. That said, a little roll in the hay and it turns out that the love of a good person can cure all their problems.

Cue riding off into the sunset.

Yeah. Not much has changed. Instead of sea captain insert Chief Operating Officer of a big marketing firm, CEO of his family’s insurance company, and famous rock star.

I’m not making any of these up.

Apparently the new brash sea captain wears a tie and worries about his stock portfolio.

Also, apparently male victims of sexual abuse seem to be the new theme. In one it was his step mom, in another it was his foster mom, in the third there was physical but not sexual abuse because his mom was a junkie who died thus preventing him from ever truly loving a woman…blah blah blah.


One really cringe worthy success spawns many, many more. Like evil bunnies.


I am learning about this phenomenon called Fan Fiction, which has been around for ages, dating back to early Sci Fi books, and perhaps older than that, even.

In a nutshell, people love a book and then take the same characters or the same setting or both and write a new work. Rarely is the fanfic sanctioned by the original author. It’s written largely for other fans of the original work.

Just so you know, the author of the weirdly successful “Fifty Shades of Gray” series admits that she took her inspiration and characters from Twilight.

I realized post-purchase that the authors of one of my three eBooks also took their inspiration from Twilight. Edward is now named Jake and wears a suit and is a surly corporate executive. Bella is now named Chloe and is an MBA intern.

Yeah. I might note here that I got through one and a half of the Twilight books and hated them immensely. So fanfic based on a series I can’t stand isn’t really working for me, but oh damn is it working for a whole lot of other people.


Careless disregard for the English language, grammar, readability, and formatting does not prevent the sale of books or degrade the author’s credibility.


So that book I just referenced, the Jake and Chloe one? Reached number nine on the New York Times bestseller list for fiction (and higher than that on the ebook list).

This, despite the fact that it was riddled with formatting issues, typos and grammar errors.


Character development? Pfft! Who needs it?


Apparently writing about lots and lots of sex, in rather graphic detail, trumps the need to actually develop the characters.

Usually when reading a book I can “see” the characters. They take on fully formed beings in my head and in a book I like, they become like friends I get to visit with for a while.

Not from this book. I know very little about the characters other than he is tall and has tousled hair. She is short and skinny with dark hair. And has big boobs.

There you go. Characters for the ages.


Euphemisms! I got your euphemisms right here!


This is the most awkward part about reading these books. Look, even Harlequin used euphemisms for body parts and particular actions. You’d think some thirty to forty years later we’d be better at providing color commentary.

Nope. We’ve graduated past “towering manhood” and “her most delicate flower” but not by much. Now the in-favor euphemisms seem to be “his sex” and “her opening”.

Can we just agree that “thingy” and “hoo-ha” are the generally accepted nomenclature and be done with it?


Everything ends up “happily every after” unless, of course, the author is working on grinding out a series of books.


And then it makes sense to leave your character lying in a pile of leaves in the woods, distraught over a break up (ahem, *coff*Twilight*coff*) and the fans begging for the next book.

Nice work if you can get it.

I had a rather in depth conversation with The Good Man last night over whether I have it in me to crank out some of this genre stuff. I *can* do it, meaning I have the skills and capability, but somehow it feels, to me anyway, a little soul deadening.

So this was a good sashay into the current state of publishing. Not sure what it means for my writing. Though my commutes have never been hotter, all that thingy on hoo-ha action!

I guess at this point in my life, you gotta make it GOOD to get this old girl rolling. And by rolling, I mean something other than my eyes. 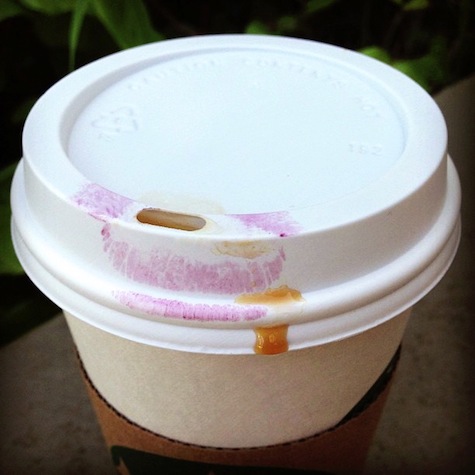 Image Copyright 2013, Karen Fayeth, and subject to the Creative Commons license in the right column of this page. Taken with an iPhone 5 and the Camera+ app, and sweetened by a little iPhoto touchup and an Instagram filter.