I remember the day I met him.

One of my friends had her eye on a boy who was part of a new Agriculture-based fraternity trying to get established at New Mexico State University.

Since he was in charge of getting new members to pledge, my friend had volunteered herself…and me, to work their rush party. It was held on a Sunday afternoon in one of the meeting rooms at the Pan Am Center.

We were there to pour fruit punch into paper cups and socialize with the prospective pledges.

My friend demanded I come with her, and so I did. I poured punch, I spoke to a few of the guys I already knew from the Ag College, and I felt uncomfortable.

Then I had this moment where I could feel someone looking at me, so I turned to look back. Over in the corner, behind a couple other fellows, was this boy.

He was the sort of quintessential cowboy you might find on the front of a western novel.

His eyes met mine for a moment, then flicked away.

Those eyes, a color somewhere between blue and black and gray. The color of a late afternoon storm on a hot August day in New Mexico.

He wore his hat low, and he looked at me again from under the brim, eyes in shadow.

My heart stopped, then skipped eight or ten beats.

I looked away and had to will myself not to stare. He still looked at me.

One of those “moments” passed between us.

A little while later, my friend dragged me around the room. I was her wingman as she made chirrupy conversation with all who would listen. Without warning, I found myself face to face with those smoky eyes.

“Karen, this is Michael**,” my friend said, by way of introduction.

“Hi!” I said, fixing him with my most winning smile.

He nodded and touched the brim of his black hat with his hand.

“How are you?” I asked, trying to get something going.

“All right,” he replied in a way that I think Louis L’Amour might describe as “laconic.”

That was the extent of our first meeting. My pal quickly dragged me off. Michael was not the boy she had in her cross hairs, so we went across the room to chase that one down.

As it turned out, Michael was friends with a lot of people I knew, so over the years, I’d come to know him a bit more.

He wore a straw hat in summer, a black Stetson the rest of the year.

He always wore a carefully groomed handlebar mustache (or as they called it in the 70’s, a “Fu Manchu”).

He’d grown up on the family farm…pecans, cotton, green chiles.

He was studying biology with plans to become a veterinarian.

He always spoke in that slow quiet manner, and rarely had much to say.

Because of this, it became wickedly easy to tease him. He’d always have a comeback, something smart and funny, spoken in that slow, quiet manner.

I had a wild, unabashed crush on Michael.

Of course, the feeling wasn’t mutual. We did manage to become decent friends.

This past Thursday afternoon, after laying my friend to rest, I sat outside at a folding table in La Union, New Mexico. We were gathered there to have a reception in memory of our friend.

I sat with my best friend and we visited with a buddy of ours from way back.

A shadow passed over the ray of sun to my side, and a chair across the table from me was pulled out.

Michael himself sat down.

He looked at me with that same intensity, and said in that slow quiet way, “Now that looks like trouble.”

“Hey Michael,” I said and he smiled.

Those intense eyes looked at me from behind the lenses of his corrective glasses. When he smiled, crow’s feet crinkled at the corners. The dark hair of his handlebar mustache showed gray.

I struggled for something to say, trying to get something going.

Something that might sum up the past fifteen years or so it’s been since we were last in the same place at the same time.

“Goddamn you have a lot of gray hair. What the hell happened?” I said.

“I had that put in,” he replied, smoothing back the hair at his temples. “It makes me look distinguished.”

He had that familiar wry look in his eye and I laughed.

My heart skipped a couple beats then found its footing.

“I’m glad I’m not as old as you,” I said. Then I inquired about his wife and kids.

I don’t suppose I have a crush on Michael anymore, but behind all the attributes that have taxed my forty-something year old friends (and me), he hasn’t changed a bit. 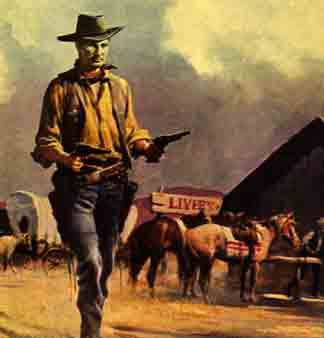 **Names have been changed to protect the innocent