The Power of Evaporative Cooling

The Power of Evaporative Cooling

You know, growing up in the high desert, the weather gets hot. Real hot, like high nineties and occasionally slipping up over 100 degrees.

And people joke all the time about, “well at least it’s a dry heat!”

And inevitably someone will make a scoffing noise and say that “dry heat” doesn’t matter.

It matters to me, anyway.

About three weeks ago, I was in Las Cruces.

The temperatures hovered in the high eighties, touching 90 at one point. The humidity was 7%.

I basked. I was like a salamander on a rock. I looooved every moment of it.

Yesterday, in the part of the Bay Area where I live, it topped out at a bold 77 degrees.

Look, the human body was made to be an evaporative cooling device.

You sweat, either the wind blows across the sweat or the air evaporates it, or, ideally, both, and your body manages to maintain a good temperature.

Add an indoor a/c unit and a glass of iced tea into the mix, and those warm summer days are quite tolerable!

At almost eighty degrees with NOTHING helping me dry the sweat and every frappin’ place I go (including my own home) has NO air conditioning (zero, ziltch, nada)…well, I had only a cool glass of iced tea to get through the day.

I actually was *grateful* for the fog rolling in around 4:00. Thank gawd for that Bay Area temperature inversion that I usually curse!

As sweat poured off of me, I could feel the wind ahead of the fog and the temps dropped fast and I enjoyed the peace I hadn’t been able to find all day.

Today promises much of the same. I shall position myself directly in front of a fan and not move around much.

The Good Man likes to tease…..”Oh you, my Woman of the Desert*…where’s your heat tolerance now?”

It’s back where it might be very, very hot…but at least it’s a dry heat! 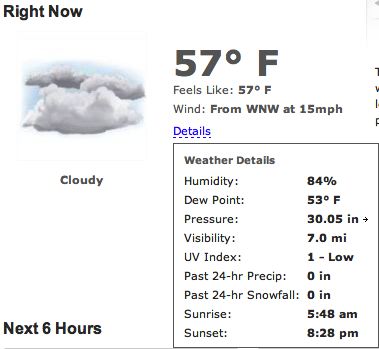 *That’s a reference to the book “The Alchemist” which I found neither spiritual nor interesting. The main female characters says that about herself…a lot. “I am a Woman of the Desert”….yeah. Whatever, sister. I am a Woman of the Red Couch. Hear my Cheetos roar.