This, this is a travesty! 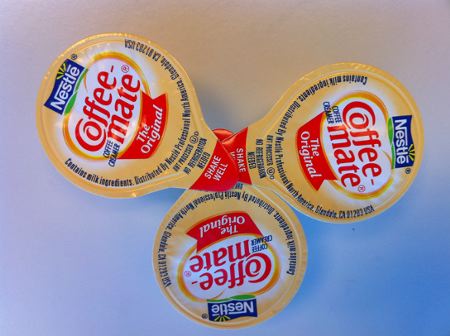 A dear friend’s husband is a self confessed Coffee-Mate hazelnut flavor addict. He stockpiles it in his fridge.

What in the seventeen kinds of sam hell are “milk ingredients?” That doesn’t say “contains milk” or “contains cream” or “contains anything you’d recognize.” No!

Milk ingredients. And oil. And a bunch of other things you can’t pronounce.

There is a big box of these pods of crap-food in our break room.

It’s the only option for lightening a terrible cup of coffee in the late afternoon when you are desperate for a cuppa and the coffee bar downstairs is closed.

Look, I’m inherently suspicious of any sort of dairy product, even a pseudo-dairy product, that doesn’t spoil when you leave it out on the counter for weeks at a time.

What is the half-life on a pod of Coffee-Mate? A billion years?

I personally enjoy a good splash of half and half in a cup of joe.

Or as I call it, half of the half, which makes The Good Man laugh.

So with no half of the half on hand, I used some of this Coffee-Mate “creamer.” Cuz I ain’t calling it creamer without them thar sarcastic quotes.

So then I poured out the coffee and tried this, also available in the break room: 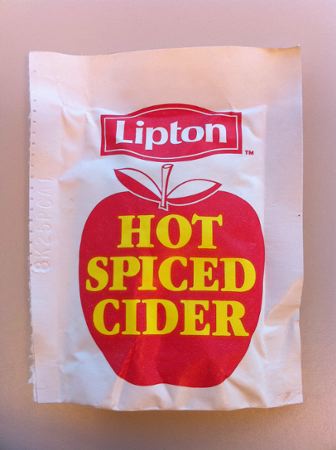 While sipping at this sort of tangy beverage from a package that does not include an ingredients list, I did a Google search. I didn’t net any ingredients, but I found this image which shows the main box that the packets come in. The box says “contains no apple…” and the rest is blocked by the packet in front of the box.

I assume it says “contains no apple juice.”

This is ALSO not food. This is more chemical crap.

I’m not any sort of Birkenstock wearing, tree hugging, raw food eating girl. I like as much red dye number whatever as the next guy.

But even I have my limits.

***Note to my readers: I actually wrote this yesterday afternoon. Upon a solid reread today, I was struck by just how much I’ve been whining lately about the no-cost beverage choices at my new place of employ. I’m still new, and while I do have some work to do, I am also sitting around a lot.

Leaving me to my own devices is never a good idea.

As I become busier with my job, I suspect the beverage posts will die down.