And We Haven’t Piped Down Since

And We Haven’t Piped Down Since

Today, August 18, 2010, marks ninety years since the 19th Amendment to the United States Constitution was ratified.

In case you are a little shy on your constitutional amendments, here is some of the actual text:

It took Tennessee’s legislature to pass the proposed amendment by one little vote for (the 36th state to ratify) to cause the 19th Amendment to become a part of the United States Constitution.

(I’m pleased to note that California was 18th and New Mexico was 32nd. Nice early adoption from my two home states.)

The 19th Amendment gave women a voice. An official voice.

This meant that a woman didn’t have to defer to a man to make her choices about how this country should be run.

My folks were married almost fifty years. My old man was an old fashioned guy. In their early years, he used to tell his wife how to vote. Many years later, my mom admitted to me that she’d go to the polls and vote the exact opposite way.

The 19th Amendment gave her that right!

Recently, over a family dinner, for no reason I could fathom, my eleven-year-old sister-in-law broke out and asked, “did you vote for Al Gore?”

I replied, “No, I didn’t vote for Al Gore. I also didn’t vote for George Bush. I think I voted for Ralph Nader that year. I believe it’s essential to cast a vote, even if it is a dissenting vote.”

I’m allowed to do that. You know why? The 19th Amendment to the Constitution!

Heck, I can cast my vote willy-nilly all over the place! And I don’t have to have a nilly ol’ willy to do so!

(This juncture is SO ripe for a “pull the lever” pun, but I’ll refrain.)

I’ve voted in every Presidential election since I turned eighteen and I’ve voted in most of the minor elections too.

This November, on behalf of my residency in the State of California and my Suffragette sisters from the past, I will cast a vote for some random person for Governor, because I sure as hell am not voting for either Jerry Brown or Meg Whitman.

I’m making my voice heard for Susan B! 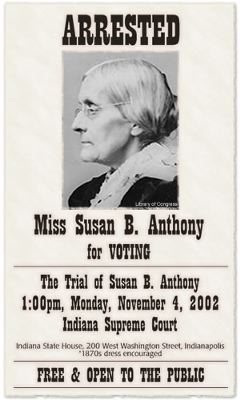