I have been reading a book titled “Tastes like Cuba: An Exile’s Hunger for Home” by Eduardo Machado.

I picked up this little gem off the “new” rack at my local library. I liked the title. Plus I have a total fascination with Cuba. This passion in past years has been fueled by the movie “Buena Vista Socal Club” which I saw in the theater, and own and watch often. It’s an amazing movie.

As the book progressed, it went from mild interest to speaking directly to my heart. Eduardo goes through quite a transformation in his life. Born and raised in Cuba, at the age of 8, just as Castro took over Cuba, Eduardo was shipped out to Miami on the now infamous Operation Peter Pan flights. He went from a life of relative luxury and wealth, surrounded by his parents and grandparents, to being poor and parentless in a new country with the added responsibility of caring for his younger brother.

When his parents did finally arrive some months later, his father moved the family to Los Angeles, a wild and wacky place for a young, sensitive, creative Cuban kid in the 1960’s. He struggled to identify himself. He wasn’t a Chicano during the power and protest periods in LA. He was not a Caucasian American. He was something no one could identify, not even himself.

To add to this lost state of feelings, in America he couldn’t get the food from home, the tastes that made him feel whole. Through growing, becoming more of an American, and exploring his creativity, he found a dichotomy. A man without a country, without the touchstone of his family that turned out to be more dysfunctional than he’d ever imagined (his father boldly admits, to his face, that he never loved Eduardo. How’s that for a mind f*@k?), and without something to identify with, it sent him down a spiraling journey into low self-esteem and depression.

What finally rescued him was the theater. First as an actor, and then ever more successfully as a playwright.

He wrote plays about his life, his family, his darkest fears, the ugly parts, the pretty parts, all of it. And though it scared him senseless to put it all out there, he still did it.

I started thinking hard about why this book spoke to me so deeply. Now, certainly, I’m no exile from another country, but I, too, was raised in a very culturally deep place with food unlike anywhere else in the world. And yes, I miss the food from my home. Daily. Did you know you can’t find whole, fresh roasted Hatch green chiles in California? And forget it about Indian Fry Bread.

And I often feel misunderstood here in California. Culturally, artistically and all the rest. It was profound when I first moved and still is something of an issue, some ten years later.

But, much like Eduardo, it took me leaving my home to be able to plumb the depths of my own creativity. Living in California has become a means to help me learn who I am, why things matter to me, and to be able to write, paint, and photograph about them.

I am a woman of two places. Like Eduardo, I’ve learned to love them both, while being conflicted at the same time.

My transformation has been on a much smaller scale than Eduardo Machado. But I guess in reading his words, I wish I could just tell him, “I get it”. 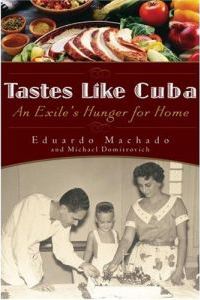