By the by, this topic was found over at the Bruce Daniels blog at the ABQjournal, though I’m going to take a different cut at it. His blog post is good, however, and worth the read.

Ok, so here’s the deal, the marketing folks behind the highly successful series of Absolut Vodka ads have been working on a new ad campaign, “Absolute World”. This has been rolling around for about a year.

Here are a few of the examples:
(sorry for the varying sizes, these were located in several places around the ‘net) 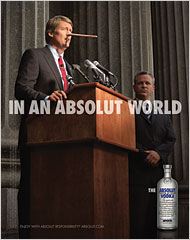 Ostensibly that we get “objective evidence” when a politician is lying. 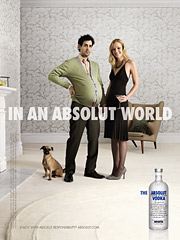 The guy is preggers. The girl gets to look hot.

In case you can’t read the buttons, they say “looking”, “twisted”, “married” and “boring” 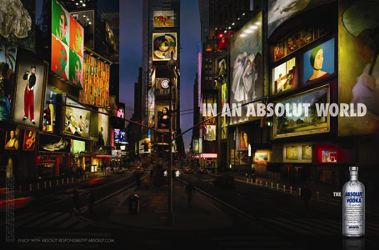 Times Square with famous art instead of advertising (ironic, no?). 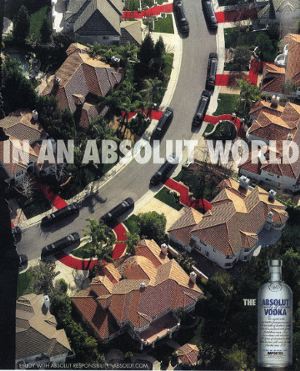 Had to stare at this one a while…I believe it’s implying that every home in LA has a limo and a red carpet.

Ok. Fine. You get the idea. I believe what they are getting at is that “in a perfect world” there would be, uh, “justice”. That politicians are caught lying, that men have to suffer the indignities of pregnancy, that the games played in singles bars would be over, that art is more important than advertising (just SO ironic) and that everyone in Hollywood is a star.

Ok? Yeah, whatever. I mean, I’m not sure I’m totally onboard with this campaign, but I get what they are attempting to say.

Until I saw this one: 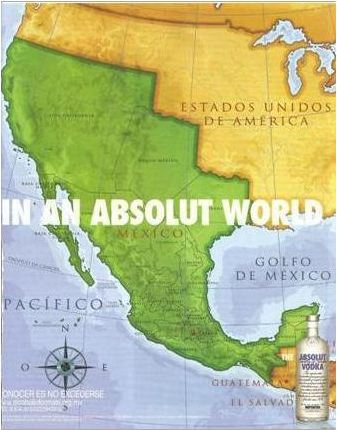 So what exactly are they getting at here?

No really, I’m asking, because I honestly don’t get this ad.

The object of any advertisement is to get people to do something. Usually to buy your product or service.

Bruce Daniels’ blog indicates this ad is running in magazines in Mexico.

So is the purpose here that we’re trying to stir up anti-American sentiment by invoking bad feelings following the Mexican-American War. For those, like me, who can’t stay awake in history class, that war took place from 1846-1848. Are we to understand that, hey, drink this vodka, feel a sense of national pride and let’s go get our land back?

Or is Absolut trying to inflame the anti-immigration people? Sure to be a hot topic in this year’s Presidential election. Do they think that people will drink their vodka and feel a sense of national pride and make sure that “they’ll never get my land”?

No really, I’m asking. WTF is Absolut trying to say here? And either way why does that make me want to drink their product?

The tone of the ad campaign seems to be about “justice”, righting a universal “wrong” (wrong being in quotes because I’m sure not everyone would agree on that judgment call made in these advertisements). So is there a “wrong” we’re trying to “right” with this new ad?

I really don’t know. I just don’t get it.

Probably for me, personally, the point is moot. I’d rather drink a jug of kerosene than Absolut. Then again, my very dear gang of Russian friends have helped me learn how to appreciate good vodka. Good meaning it doesn’t go down like, uh, kerosene and make my head feel like a punching bag.

But let’s not lose the point here…

What IS this ad trying to say? I can’t decide if I should be offended.

Oh hell, it’s Friday, why waste the energy. I’ll just go with a head tilted doggy “baroo” and move on.

And have a tequila drink instead.