“So, did you get caught up in the Black Friday stuff last week?” a coworker asked me this morning as we kibitzed about the Thanksgiving holiday break.

“Yeah, we were at Target until 2am standing in line for an iPhone on Thanksgiving day. It was crazy.”

That’s all I had to say. Wow. There was no other answer I could muster. Why would anyone would want to stand in line at the ungodly hour of 2am to buy a piece of electronic gear?

And I’m a big fan of my iPhone. Still, I don’t need to take part in that.

I think that people forget that their time and their sanity also has a value.

This is something that The Good Man reminds me of with some frequency. I was raised by an engineer. Engineers are fairly squeaky with the wallet. The lure of a good deal is strong with me.

If I take a look at my paycheck and then divide down (I’m salaried) I can figure out how much my employer pays me by the hour. Then I can apply that to the time standing in line just to get 20% off an iPhone.

Or, I can try to figure out the value of time spent with family and friends.

My coworker left for Target at 8pm after having turkey and cranberry with the family. Stood in line to get in the door. Stood in line until 2am to get the phone and spent another hour waiting to have it activated. 8pm to 3am is seven hours.

Maybe I’m just a stodgy ol’ fuddy duddy but I spent those same seven hours with The Good Man and the Mom-in-Law and petting the ailing Feline. Those were good hours and time well spent.

Ah well, rereading this post I realize that I am judging and that’s not right either.

Happy Kickoff to the Crazy Days leading up to the Holidays.

Don’t forget to hug your sweetie a little bit before you run off to get in line. I’ll hug mine twice for you. 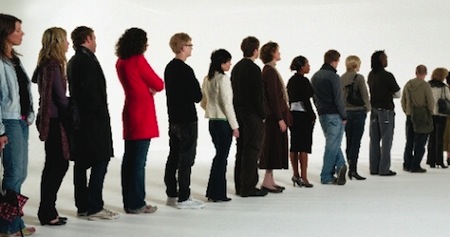