Back in college, I took my studying rather seriously.

More seriously than my various roommates, my suitemates and pretty much everyone in the dorms where I lived.

Anyhow, when I was a kid, I had been lucky enough to have my own room, so I could study in there, door closed, and be most effective.

College was a whole crazy world of living with strangers. After lamenting my issues to my mom, she suggested I try the library on campus.

This sounded awful. I like being in my own space to study. To have my own comforts around.

But desperate for a solution, I packed up a backpack full of books and things, and walked over to the imposing building.

I was just a lowly freshman, and that library was intimidating!

But, as I looked around for a place that might work for good solid studying, I discovered this fabulous feature called a study carrel.

I could sit in one of these bad boys with the high walls and block out the rest of the world. I could unload my backpack of all my things, set them around me, and create a personal space where I didn’t have to see or hear anyone.

In fact, over waaaay in the back, by the microfiche readers, where it was kind of dark, there was one lowly study carrel that was *mine*.

No one else liked it and hardly anyone came over that way. If they did, it was only briefly to read something on microfilm or microfiche, so it was blissfully quiet and I was mostly alone.

I got some really, really good studying done there. I spent HOURS in that carrel…while my friends, uh, had, you know…fun.

So, here it was, this past Saturday. The date was the 28th and I was still 5,000 words from the end of this year’s National Novel Writing Month challenge of 50,000 words.

The Good Man had to work on Saturday and so I was alone with my imposing battle.

I was really at a standstill on the writing. I hadn’t written a word in three days, and it looked like I was not going to make it to the finish line this year.

So, in a bid to change my scenery and thus get the ol’ Muse working again, I decided to go to the local library. The went to the one near where The Good Man works so we could meet later for a break.

In I go and I stalked around the place, looking for a good spot. It is a pretty ancient library, so not every table space has a power supply.

So I trudged up to the third floor. I liked it because that floor was behind a closed door. That keeps it nice and quiet.

And lo and behold! They had study carrels. WITH POWER!

I even found one waaaaay toward the back, where no one else would go, plugged in my power supply, dipped my head behind the walls and got to work.

And who knew, all these many years later, the study carrel still works?

I banged out 4,000 words in about three hours, and would have finished to the end, but had to go meet the in-laws for dinner.

Later that night, after a margarita and some soothing Mexican food, I wrote the final 1,000 words and crossed the finish line of my fifth NaNoWriMo event.

I owe it all to that beautiful, wonderful, magical study carrel!

(terrible iPhone photo, but you can see how sunny and nice it is. I may go there again just because!) 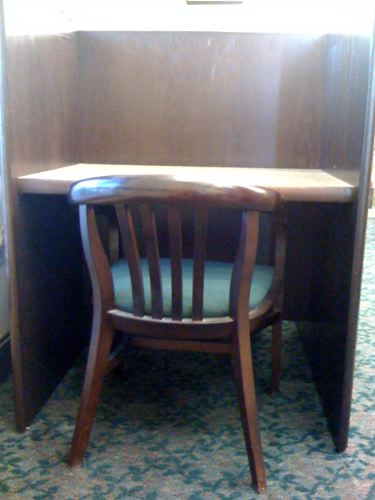