Sometimes, the good guys can get ahead. But only sometimes.

Last week, I had occasion to work with someone at my company who I have a lot of respect and admiration for.

Long story short, my friend needed help. He’d gone and done something that is not *quite* in line with all the fun policies and procedures we have, and he knew it.

So he came to me. The Fixer.

And I did. Fix it, that is. I fixed it by taking a rash of sh– from a variety of Director-types. I knew the level and intensity of the sh– I’d receive, and was willing to take it. I pled the case and won.

But that’s really only backstory…

Turns out my friend is classier than I ever gave him credit for (he IS an engineer, afterall), and so Tuesday morning, this arrived on my desk. 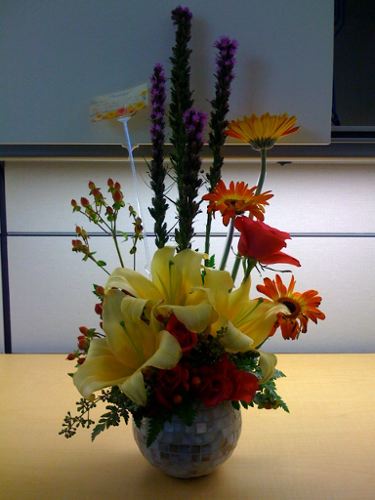 Pretty, huh? I think so. I like the vase a LOT.

So upon receipt, I quickly scooped the flowers off my desk and ran to my boss’ office to show her the *gratitude* I’d received from a client team. I got proper ooh’s and ahh’s in return.

I also ran into my Director in the hallway who said, “Oh, are those from The Good Man?”

“Nope!” I replied quickly and explained the gift. She was also *very* impressed.

But that’s still not the point.

You’ll note in the photo that this arrangement has several large lilies.

I do love lilies.

They smell divine, they really do.

But now, here we get to the point of this rambling blog post.

I recently read a book by a lady named Cathryn Michon. The book was a mostly autobiographical telling of the horrors of her recent love life. It was a mostly throwaway book, but had a few good laughs.

One part, appropo of nothing, she was talking about being in a high level meeting and noticing a flower arrangement. She made a comment along the lines of how flowers are basically natures little oversexed organisms, what with all the throbbing pistols and yearning stamens.

I had a pretty good laugh at that when I read it. Tis true.

This was brought to mind again with these flowers sitting here on my desk.

The part that makes them smell so heavenly is the, ahem, rigid glistening stamen.

I mean, look at this thing! 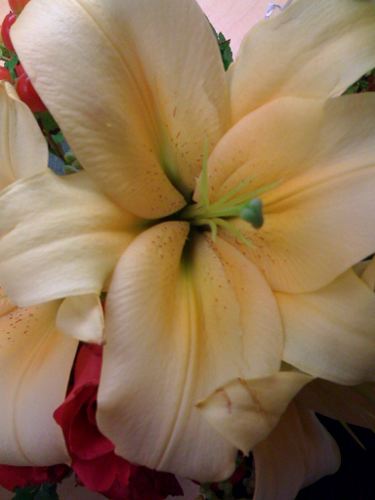 SCANDALOUS! Right here at *work* even!

I have an austere Russian friend who once I witnessed going into a huge bouquet of Stargazer Lillies and unceremoniously ripping the pollen caked centers out of all of them. I think I actually winced.

Free love for flowers!
.
.
.
(editors note: yes, I know, any writing instructor would advise students to HAVE A POINT when they write something. Much like fixing my friend’s breach of the rules, I’m willing to take the grief for breaking the rules for good writing. The joys of blogdom…)