Here…and here….and over there….oh yeah, and that place too.

In the early afternoon hours of this past Saturday, I traveled up to the city of San Francisco to take what promised to be a really wonderful yoga class. Entitled “Yoga for Writers” it was taught by a gentleman who is both a well known local columnist and avid Yoga practitioner.

I like his writing style and the price was right, so I signed up. I arrived in time for class with my brand new yoga mat firmly in hand and a lot of hope.

This class promised that through Yoga, through getting out of your head and into your body and tapping into your inner self, you might be able to write more smoothly, easily, and with lots of verve. (ok, I made up the verve part, but it sounds good).

While I’ve been doing a good job keep up with my blog, mostly, the fiction side of my writing life is suffering in a big way.

Um. There are only nine days left? Right? I’m utterly failing. I stare at the screen and I got nuthin’ to write. It’s very bad.

My writer’s block has become immense. Intense. It depresses me. So I really did rather hope that the yoga class would help free up the ol’ Muse and get her dancing.

I was in a TERRIBLE mood after having a god awful week at work, and so I was actually scared and nervous going into this thing. Would the class be chock full of hipsters? Would it be chock full of tiny yoga girls in tiny yoga pants?

Answer was yes on both counts.

I entered the yoga room and immediately wanted to pass out. Why is it so *hot* in there? Ok, yeah, I know, they keep yoga rooms warm, even if you aren’t doing the kind of yoga (Bikram) where you sweat your holymarymotherofgod off while you stretch.

Sitting there on my little mat waiting for class to start, I was already pitted out.

Ok. That’s me. I’ve done quite a bit of yoga in my life, though not recently. I know my Tree of Life from my Warrior pose. I walk three to four miles a day.

I’m not an athlete but I certainly have a moderate level of physical ability.

My lard ass was actually NOT prepared for what lay ahead.

I thought this would be a writing class interspersed with yoga. This was instead a hardcore not-for-sissies yoga class with an occasional writing exercise.

In the three hour class there were three 15 minute writing exercises and one 15 minute stint of sharing some of what we wrote.

The other two hours were intense, almost brutal yoga.

Yoga never hurt me before. Why, overly large statue of Shiva in the front of the room, WHY?!?!?!

My god. This isn’t peace, love and butterflies. It’s agony served up on a rubber mat!

I hurt. I can hardly use the restroom because while sitting down goes ok, I can’t get back up off the toilet. I can’t be still for more than a few minutes at a time or I yelp in pain when I move again.

Look. I’m a writer! We’re notoriously pasty and out of shape!

When did yoga start hurting people?

I found this article titled When Yoga Hurts from several years ago (2007) with concerns that Yoga was being taken a wee bit too seriously (i.e. competitively) in the local health clubs.

(To be fair, the instructor was actually really good, just incredibly hard core. He’s that kind of guy who can balance a handstand on one pinky at the rocky tip of a mountain and hold it for an hour while thinking pure and spiritual thoughts. Whatevs. I’ll meditate on a bag of chips and feel just fine.) 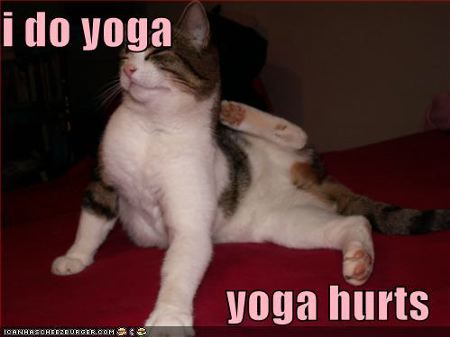