Today as I meandered my way over to the shuttle bus to take me to the train, I picked my way through the parking lot at work. “Picked my way” because there is heavy construction going on at the building next door to mine.

Sitting there, by itself, in the lot, was an empty wooden wire spool. You know the type. Found at most construction areas.

Wanna know my first thought? “Man, should I take that?”

You know, it’s been some fifteen years since I graduated college. While I personally never had a wooden spool table, many friends did. I dated a few guys who did. I think the wooden spool furniture sensation is mainly a guy thing. Along with bookshelves made of cinder blocks and plywood.

It’s the same feeling I get when I see empty milk crates. I used many a purloined milk crate in my collegiate career. Good bookshelves, storage devices, and even a bedside table.

I think I still have some of those indestructible blue plastic things in my basement (all apologies to Price’s Dairy from, you know, fifteen years ago. What is the statute of limitations on absconding with a milk crate?).

Oh, is also happens when I see wooden pallets. Back then they were made from a pretty dense wood and if, say, a friend filled up the back of his pickup with a bunch of stolen pallets, piled them up by the river, poured diesel fuel on them and lit a match, you’d not only have a nice roaring fire, you’d have a long lasting warm, bright fire by which to socialize with friends.

For some reason, this old scrounging habit dies hard. The “making it work” when you have no money, and what little you do have must be saved to buy beer phenomenon still lives deep within me on a cellular level.

Despite the fact that I have a real job now and can buy beer, you know, pretty much whenever, I still have that moment of “I could take that…” and think about how it could be made useful.

I seriously considered how to get that spool out of there.

Then remembered a) I don’t need a table. I have one. A nice one. And 2) even if I didn’t have one, I could go to Ikea and buy a nice one. I don’t have to settle for a splintery wood spool.

So I’m still a scrounger from way back. But I refuse to eat Ramen noodles anymore.

Some habits you just gotta leave behind. 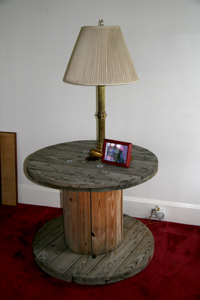