Over the past weeks, the good folks over at NPR are doing a series of short essays about the sounds that evoke memories of summer.

Well, that just opened the door to the Wayback Machine and shoved me right in. I’ve been lost for a few hours, thinking…remembering.

Turns out I can’t name just one. So let’s go with five.

This is a cacophony of noises. A creaky drum turning inside the cooling unit, the wet wind whooshing out, and the drip, drip, drip of water running off the roof.

Both loud and comforting all at once. I’m a light sleeper, but the white noise of a swamp cooler set on high in the dead of a hot summer day will drop me fast into sweet dreams.

Not a very original summer thought, but a genuine memory. That droning buzzing sound used to drive me bonkers.

Where the swamp cooler lulled me to sleep, the cicadas kept me up all night.

We had this huge tree in our backyard that would fill to overflowing with the damn bugs.

There is a site I found that calls cicadas “nature’s vuvuzela“. Damn right! Gah!

I used to mentally try to get them to stop. Like Uri Gellar bending spoons, I thought I if I thought hard enough I could control it.

I couldn’t control it. Damn winged creatures had a mind of their own.

Such a distinct sound of summer.


The low rumble of an August monsoon storm off in the distance and approaching fast.

The summer storms move so quick you know it will be on top of you before you know it. It goes from bright sunny skies to black boiling skies in what seems like an instant.

I’d be out in the yard playing or on my rollerskates and I’d hear that sound. Like a low mumble at first. I’d take off for home before it turned in a loud wail.

Here’s a not very well kept secret: I’m a skeerdy cat when it comes to storms.


Styrofoam cooler and lures on a fishing pole.

Do they even make squeaky Styrofoam throwaway coolers anymore? Because that’s an unmistakable sound. We’d pack sodas for us, beers for dad, and bait for the fish along with a couple sandwiches into the blue speckled cooler. Then the fishing poles alongside with the jangling lures hanging off the end.

Then we’d all load into the truck and head down dirt roads to fish Ute Lake.

That squeak jangle engine rumble symphony can only mean summer to me.


Flame thrower on a tumbler of green chile

Ok, this one may be more of a smell than a sound memory, but at the end of summer (like, oh, now) the green chiles are coming in from the fields and at every grocery store there is some guy with a flamethrower and a metal turning basket.

My quintessential sounds of summer may not be NPR worthy, but they all make me smile.

In the summertime, my Fair New Mexico is a beautiful place to be…for ALL the senses. 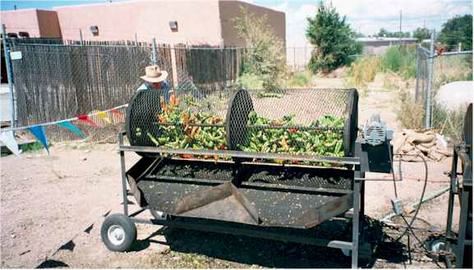 Image from I don’t know where….if it’s yours, let me know and I’ll credit or remove at your request.