So in a bout of middle of the night insomnia, I started exploring the Wackystuff Flickr photo stream further (see Easter image from yesterday).

I went through every page, every image and found some great stuff.

Lo and behold, among the whack, I found this, a mid-century linen postcard: 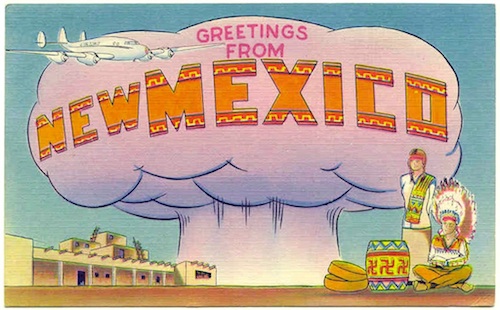 Weirdly enough, the image to the left on that postcard? I know it’s supposed to be Taos pueblo, but for some reason it looks like the old Albuquerque Airport to me. Maybe the with the plane over head that is what it’s supposed to be?

Dunno. Just know that this card is not, as they would say, politically correct.

I love one commenter on the photo said: “All these things really say to me: ‘Stay the Hell Outta Here! We are frickin’ crazy.'”

My Fair New Mexico, how misrepresented you are. And how I love you so.