Ah yes, it’s that special time of year. Right on time. We have arrived at the rainy season when soaking rains last for days and days and make it non-stop damp. Makes slugs and snails slither across sidewalks (: shiver :).

Inspires my auntie (formerly of Oregon) to claim that mold is growing in one’s own nooks and crannies. (ew)

I remember when I’d first moved to the Bay Area back in ’97. I was VERY naive. Incredibly so. I spent the first year living here picking hayseeds out of my hair.

I used to cry at night wondering where all that rain would go. In New Mexico, that much rain would cause massive and cataclysmic flooding.

I had this incredibly caustic friend I worked with at Lockheed. She was a lifelong Bay Area resident and she took me under her wing early on. I remember asking her where all the water would go. She looked at me incredulously, and said “uh…there’s this thing called the Bay?”

“Ohhhhh,” this desert rat said. Beginning to realize that Dorothy was not in Albuquerque any more…

But the best story came one afternoon at work. After weeks and weeks of rain, we were outside so my friend could take her afternoon cigarette break. I don’t smoke but would go outside with her. We were talking and I looked down and saw the most profoundly blue iridescent fuzzy thing on the ground. It was beautiful. I’d never seen such a color. I wanted to take a photograph!

Was it a bug? A flower? What incredibly new and wonderful thing was this that I had discovered?

So I asked my caustic friend!

She took a long drag from her Marlboro Light and kicked at it.

Then she fixed me with a steely glare and responded, “It’s mold on bird shit.”

So I’ve toughened up a bit over the years. Age and intention can do that to you.

Yesterday I was on my way to the stop where the work shuttle bus picks me up to take me to the CalTrain station.

And I saw something that caught my eye. And since my phone has a camera, I stopped, squatted down, and took a photo.

Here’s your Bay Area “art shot” for the day. Better then mold on poop, right? 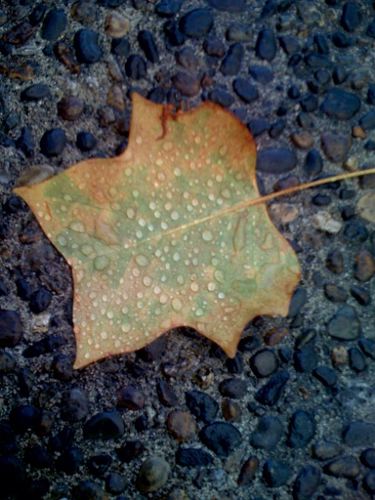