And then there were three.

And then there were three.

Was sad to read in the ABQjournal today that it looks like Bill Richardson is giving up his run at the Presidency.

I had rather hoped that he could hang in there at least until Super Tuesday. I had wanted to look down at my ballot and see a New Mexican’s name there. Don’t know if I would have voted for him (I might have).

I think he made a valiant run as the underdog in a race with some big names. He raised the visibility of New Mexico, for both better and worse, in my humble opinion. It hurts to hear on the news about what a poverty state NM is, how low are the test scores in the schools, etc. I know it’s true, but I hate hearing it blared out on national news.

It seems that Bill has gotten on the fighting side of the Clintons too. I’m sure that was a calculated move but I’m not savvy enough to work it out.

For now, I’m sorry to hear that the Governor of Oh Fair New Mexico is stepping out.

I give him applause for making a run at it.

In a side note…I’m consoling myself today with the news that one of the candidates I’m considering from my open job is a graduate of NMSU. If I can’t New Mexicanize the country, I can start locally! heh! 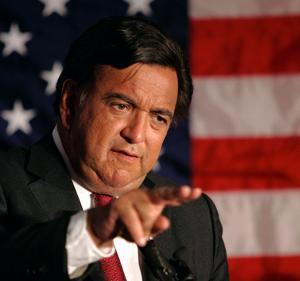