The Cute Boy™ is very into politics. He can speak about them intelligently. Profoundly. And he knows what he is talking about.

After being harangued by dear old dad in my formative years regarding politics (papa leaned so hard to the right it’s a wonder he didn’t flop over. Daughter tends to be more than a skosh toward moderate). And when I say harangued, I mean dash from the room at a dead run to avoid the inevitable lectures.

That being said, I’m trying. But I find I can’t tolerate listening to any of the current candidates speak. None. Right. Left. In the middle. Out in left field. I just can’t. It is just so false. I get the same tense-in-my-chest feeling that I get when a sales-weasel puts the full court press on me at work. I find it distasteful. Disingenuous. And just not ok.

I have been following the trail of Oh Fair New Mexico’s own Governor with mild interest, mainly because I’m curious to see how this all goes.

When I first heard he was running, I made barfing sounds and stamped my little feet.

See, when I was living in my home state, I didn’t like ol’ Bill all that much. It’s ok. I own it. (Don’t tell Jim Baca, ok? I like Jim a lot and don’t want to get on his fighting side.)

It started with that g’damn cheesy billboard on I-25 between Albuquerque and Santa Fe. If you lived there long enough, you remember it too. “Bill Richardson welcomes you to Northern New Mexico”. Bill leaned across his desk, fixing you, the driver with that jowly stare.

Then I came to dislike him more because both my folks worked for Sandia Labs and for a while were located at the WIPP Site in Carlsbad.

If you are unfamiliar…in a quick nutshell…the Waste Isolation Pilot Plant or WIPP is an experiment in the disposal of low-level nuclear waste. The WIPP site is located way down in some ancient salt beds. The theory (this is me, a layperson and not a scientist, so give me wide berth) is that a properly sealed container could be placed into a hole made in the salt. And over time, due to some fluids in the salt, it will migrate. Meaning the salt will close in around the container, encapsulating it, thus keeping it safe and sound and away from contaminating anything else.

Obviously, this plan has met with a lot of opposition over the years. The moving brine water means that folks are concerned with contaminating water supplies. And other such (legitimate) concerns.

So my folks worked there back in the early 1990’s and the site was dug out, ready to go, but faced massive political opposition to opening. Or even *trying* out the storage of some low level nuclear waste (like gloves, jumpsuits, etc from workers in nuclear plants).

One of the biggest voices of opposition was our own Bill Richardson, congressman from the northern part of New Mexico. Vehemently.

Except when he became the Secretary of Energy under Bill Clinton.

I guess after hearing my dad rave on about the evils of Richardson, much of it took hold in my head. Again, for the folks following along at home…dear old dad was a staunch Republican. In hindsight, that *may* have colored his view…just a skosh. But to be fair to my pops, those were frustrating years at WIPP because they were fairly *begging* to be given the chance to at least TRY their theories and see if they worked. And Richardson issued a firm “nyerhe, no, nada, nope”. Didn’t make my folks big Richardson fans.

And well, after all of this time….I’m not a fan of Bill either. Just not. Or was not, I should say.

As this campaign progresses, my mind might be changing.

I’ve listened to some speechifying over the past week. I thought I was an Obama girl, but I really listened to a speech he gave in Iowa and was sort of turned off when it was done. For a variety of reasons. I think Jim actually put it best in yesterday’s post about worrying that he’s all hat and no cattle.

Edwards is sort of blah to me. And I think he’s putting on that accent a bit. I know it’s natural, but he seems to Hee Haw it up a bit, in my opinion. But so far I’m ok with him. Not sure I’m Team Edwards yet…I’m team no one yet, really.

And forget all the Republican candidates. I listened to their first debate and was like, uh, no.

So. Sunday night I watched the Democratic candidates debate with each other. Well, I watched the end. Listened to much of it while working in the other room then came and sat down and watched. It was the last question that intrigued me.

Moderator Charlie Gibson asked the question, “Of all the debates that have been held so far what have you said that you wish you could take back?”

Clinton went first. And didn’t answer the question. Blathered on about how the real thing to concentrate on was the difference between the Democrat and Republican debates. I kept yelling at the TV “ANSWER THE QUESTION!!!”

Richardson went next. He told a funny, charming story about one of the early debates where he was asked who was his favorite Supreme Court Justice. It was endearing, self-deprecating, and got a laugh from the audience and candidates (and me).

Edwards said his was when he made fun of Hillary’s jacket early on. Ok, at least he answered the question.

Obama said he agreed with Clinton and blathered about the differences between the two parties. He also didn’t answer the damn question.

So at the end I was like “oh my god…Richardson *may* have just made me like him.”

I don’t know what to do with that.

It may be for the best that dear old dad has (sadly) passed on from this mortal coil. Because I think if I voted for Richardson it would send him into convulsions…

I have until February 5 to figure out exactly which name I’ll put the mark next to on the ballot. I may have to do like I did in that whacked out election for California Governor…pick the most outlandish candidate and give them my nod. Not very mature, but it made me feel better when I left the polling place.

Ok. All this talk of politics is making me twitchy. Wonder what Britney is up to today? 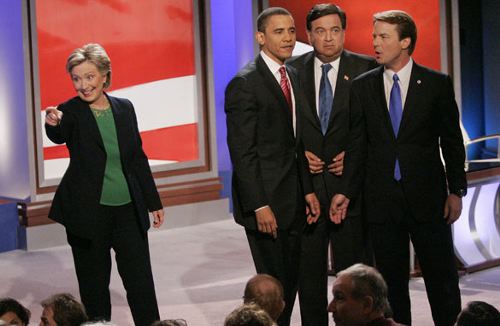