Currently, at the building across the way, there are some gentlemen hard at work putting a new roof on the two-story structure.

Roofing has got to be some grueling, backbreaking work, and they’ve been toiling at this for a few days now.

About an hour ago, all work went quiet over there. I thought maybe they were on a break. They weren’t on a break.

It appears they were having a little conference. What they’d call in the corporate world, a “root cause analysis”.

I suspect they discovered what, or rather, whom was at the center of the mistake, because I could then hear the supervisor of this project having a one-on-one mentoring conversation, loudly, with his employee.

Let’s keep this a family friendly post…for all the instances of the eff word, I will substitute a more appropriate word.

Oh let’s have fun with it, let’s use the word “hamburger.”

Here we go, a faithful recounting of this clearly very hands on and empathetic manager as he guides his employee through a big error.

: sound of employee mumbling, trying to explain his reason for hamburgering everything up :

“Aw man, what the hamburger. Get back to work!”

And with that, all the machines started up again, the smell of tar once again filled the air, and the team of folks got back to roofing.

This, among the many reasons why I feel so fortunate to be able to work a white collar gig. I’m pretty hamburgering sure that if my boss ever talked to me that way, I’d have a pretty good hamburgering lawsuit I’d think about. 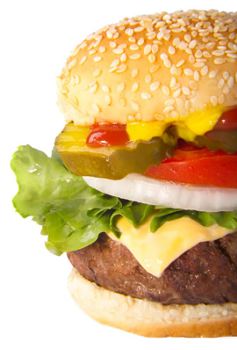