I had a pretty good laugh upon reading the ABQjournal this morning. I love our fair New Mexico. As hard as we try to play with the bigs, trumpeting articles like “Santa Fe Named No. 2 for Artists” (never mind my childish potty humor over using “No. 2” in a headline…..) showing we’ve got class, there is always another article to show just how small town we still are.

I’m referring to this article, “Albuquerque May Get Tricky With Red Light Cameras”. I’ve read over the past few weeks the articles discussing the future of the cameras. Lots of folks are understandably unhappy with them. I’ve only given half an eye to those articles because where I live now, the San Francisco Bay Area, red light cameras are prevalent and have been for the better part of the ten years I’ve lived here. I don’t like them anymore than anyone else, but they are just part of life. I’ve been cheering the good fight put on by the folks of New Mexico, but I know it is, in the end, a losing battle.

The article states, “City officials are talking about shutting down the camera operations at some of the most successful intersections but leaving the apparatus in place, making it appear as if the device still works.”

What’s happening there? Not enough funding to run the systems? Or not enough funding to have enough people to review the photos? I understand that is the most time consuming part, having people analyze the photos. The article states that some $6 million has been taken in since the program’s inception in late 2004 (which seems low to me for a two year span given tickets here will run you $280, but what do I know?).

“‘We are coming to a point in the program where you evaluate,’ police spokesman John Walsh said.”

Evaluate what? Money? Effectiveness? They report that accidents are down at the main intersections where this is being used. What’s to evaluate about that?

The best part is that they are TELLING us they are doing it. Those wacky APD folks sure are wily!

They don’t outright say it, but the plan to move the cameras to other intersections and leave inoperable shells behind has got to be a cost saving maneuver. For a program that’s taken in over $6M.

That’s like when your kid has a toothache….instead of taking your kid to the dentist, tying a string to a doorknob and yanking that sucker.

That’s like using tin foil for curtains in your house.

That’s like using a wooden cable spool for your dining table.

God I love New Mexico. The more we try to big league it, the more our true nature shows. I’m proud to be a New Mexican…….I really am.

I raise bailing wire and duct tape in a salute to Mayor Martin Chavez and the APD for this fabulous traffic accident saving idea. 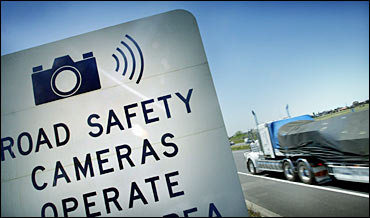