A leap day is observed because a complete revolution around the Sun takes slightly longer than 365 days. It compensates for this lag, realigning the calendar with the Earth’s position in the solar system; otherwise, seasons would occur in a different time than intended in the calendar year. — Wikipedia

On my way into work today, I was listening to whatever morning radio station was not running commercials and landed on a crew of three djs discussing facts and trivia about today, February 29th. Better known as Leap Day.

Yeah, yeah, yeah, we all know the deal. The Gregorian calendar is nice and all, but doesn’t *quite* work. Close only counts in horseshoes and hand grenades, as the saying goes. And, apparently, calendars.

While I have a degree in finance, I am not a finance person. Humorously, the work I do is slotted under the Finance organization, so I can confidently say that in the parlance of the Finance industry, Leap Day is better known as a fudge factor. A plugged number. A “what do you want the numbers to say?” kind of adjustment.

I work in contracts and we have something similar. It’s what one of my first and favorite bosses called “weasel words.” This is where the person on the other end of the contract (usually a lawyer) is being petulant and you can’t quite give them the language they want. Instead you can appease them with something in the vicinity of what they want. Words like “reasonably attempt” and “in accordance with best practices.” Leap words, if you will.

Not to digress, but baseball has something similar. Called a “neighborhood play” it roughly means that the second baseman doesn’t have to actually touch the base or runner to get the out as long as they are near to the base and in control of the ball.

Second basemen tend to stay a bit off the bag because lead runners like to come barreling in trying to disrupt a potential double play. The topic of the neighborhood play came to a head during the playoffs last year as a player got seriously injured.

So in this Leap Year, baseball looks to be changing up the rules. Which will likely make for a lot more leaping shortstops trying to stay off the DL.

In the spirit of both Leap Day and my favorite sport of baseball, I present to you my favorite Giants shortstop of all time, Omar Vizquel, doing what he did best. 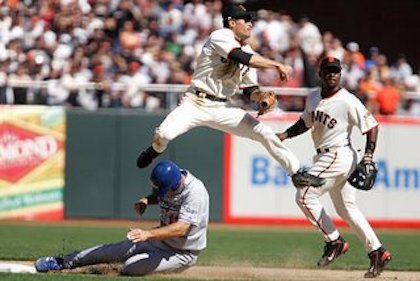