On Sunday morning I woke up lazy and calm and satisfyingly rested. The temps outside were too chilly to rise from my cocoon, so instead I lolled in bed with The Good Man and the Feline. TGM and I talked over Sunday morning things, as couples will do, holding hands, talking quietly, and laughing.

After a while I said I was going to get up because I was hungry.

“What are you having?” TGM asked.

“Hmm, probably a bagel,” I replied, thinking of the mediocre but passable bagels we had procured the day before.

“What are you going to put on the bagel?” he asked. Food is a thing with us. We both love to eat and sometimes the story leading up to the nosh is just as important as the nosh.

It was as if he was asking me to tell him a story. A naughty, naughty story of bagels and cream cheese and toppings that would make us both suck the air in through our teeth and nod approvingly.

I thought a bit, adjusting my legs under the comforter, stretching my calves and toes in the anticipation of being upright.

“Probably just some cream cheese,” I said, staring my lactose intolerance square in the eye and refusing to blink.

“And tomatoes?” he asked,

At my hesitation he gave me a look somewhere between “you are an alien” and “you shot my dog”. He was crinkly browed and taken aback.

The frown intensified. No words were said. Only this ever-deepening sadness and disbelief.

“It’s not that I don’t like capers. I do. Just not as much as you. I don’t always want them on my bagel.”

His frown deepened further and his head drew back like he was trying to put me in better focus. Like he was wondering to himself who this person was that he thought he knew. Like he was thinking, “I really should have gotten that pre-nup back when I had the chance because no way in hell would I have gone through with it if I had known she wasn’t going to have capers on her bagel on a lazy Sunday morning in December 2013.”

I shrugged. He shook his head and then I exited the bed. I paused on the way to the kitchen to take my morning vitamins and The Good Man went on ahead of me and began toasting two bagels.

He set out a variety of fixings and when the bagels were just a slight crispy brown around the edges, he said, “Your bagel is ready.”

When I accepted my bagel, I schmeared it with cream cheese and I lightly salted it and I added tomato slices. And then I put capers on my bagel because it was the right thing to do. The right thing the sake of another beautiful day in a long and happy marriage with a wonderful man.

He was right, the capers were delicious. In the world of food, I may reign supreme on all things green chile, but I should know better than to question the handsome boy from Brooklyn on the ways and means of eating a bagel.

Even a mediocre bagel nibbled on a frosty Sunday morning in Northern California. 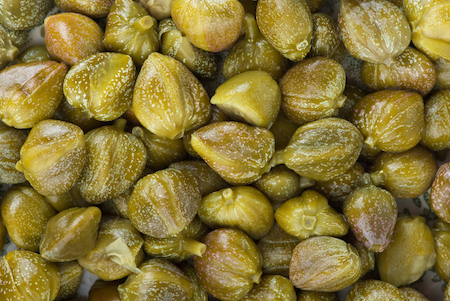