The other day, I was out walking with my lunchtime exercise pal (for regular readers, the Worm Girl) when we had occasion to cross paths with three different redheaded men. Of the bright orange and freckles variety.

“Must be a ginger convention,” I quipped.

She laughed, then my newly on-the-market friend commented “You know, I can’t explain why, but I’ve never been attracted to redheaded men. There’s no good reason, it just doesn’t work for me.”

I replied, “Yeah, me too. Though I know why. When I was in elementary school, I went to school with a ginger kid. He had a lot of troubles with wetting his pants. I felt so bad for the guy. He was a nice kid, but he used to make puddles everywhere.”

We walked for a while longer. Then I said “you know, I should look him up. I wonder what he’s up to these days.”

“He’s probably a CEO and incredibly rich,” my friend said, and I agreed.

So that night I went online to look up my old schoolmate from my formative years. The pants wetter.

He’s a pretty darn successful race car driver. His posted record is awesome and now he owns a racing company with his parents.

Guess we all pegged that kid wrong didn’t we?

Which makes me think about all of my friends with young kids who struggle with the weird culture of mommies that insist on comparing “my little Tommy” to other kids. They always make sure you know that their kid is better than yours.

It’s evil and it’s wrong and it makes me UTTERLY mad. You have no idea how many mom-friends I’ve had to talk down because of this nasty culture.

One might think that my school chum was a less-than kid because of his bladder issues.

Since confession is good for the soul, I’ll admit I was the class nose picker. When the teacher got boring, the treasures of the nostrils seemed far more interesting. I’m not proud of it and I took a lot of guff in first and second grades for it.

At close to forty years later, I think it can be said that I turned out pretty well too.

Power to the pants wetters and the nose pickers and that kid that barfed on the school field trip and then no one wanted to hang out with him. They are your future race car drivers and CEO’s or just your average soul with a decent job and a good spouse who does her best to be a good member of society.

Blessed are the weirdos, for we shall inherit the earth….right after we’re done skeeving everyone out. 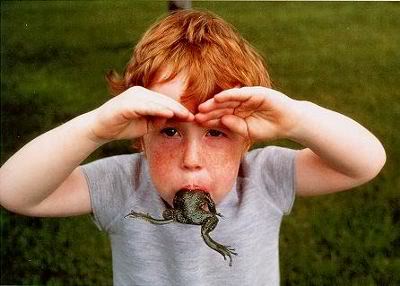