It’s no secret I’m a bit of a baseball fan. My team’s season ended in a blaze of humiliation, some 18 games out of first place. To make it worse, two teams from our division, the Arizona Diamondbacks and the Colorado Rockies made to the post season.

Oh the pain of watching the competition extend their season.

Been having a hard time deciding who to root for in post-season games. I think I’m loving the under-dog, whooda-thunkit magic season of the Rockies. So in the NL, they are my team (not a tough decision given the lightening in a bottle they have working), especially after rolling over the Diamondbacks in four straight games.

In the AL, it’s harder to decide. I mean, I like the Indians, they are a ne’er do well and know the pain, like my beloved Giants, of going to the World Series and coming home empty handed. I have a good friend who is from Cleveland so out of respect to her, I’ve been mostly cheering on the Indians. However, in previous years, I’ve been a post-season Red Sox fan. So I guess all this is by way of saying I’m waffling…..

In today’s ABQjournal I read an interesting article that I’m now taking into account while sitting on the AL fence.

While the young man mentioned in the article, Jacoby Ellsbury, isn’t a New Mexico native (cuz then I’d be off the fence and on his side in heartbeat), he does have ties to New Mexico.

Plus I just think it’s pretty damn cool that he’s the first Native American of Navajo descent to play in the majors. He was called up to Boston in August when Coco Crisp went out with an injury and so wowed critics and fans that Francona added him to the 40-man roster in September. Now in his first year in the bigs, he’s playing on a post-season team trying to get to the World Series. He’s been praised for both his speed and enthusiasm and is a pretty good hitter.

Damn, that rocks. Gonna have to squint at the screen a little more now to get a look at this up-and-comer. Maybe he can log some playing time in the ALCS and I’ll just have to root for him.

I always did love a story of someone living the dream. 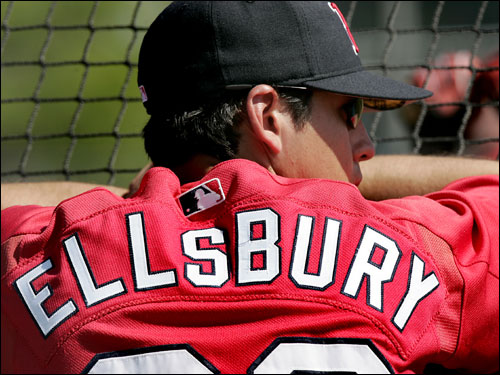