Today I’m going to lean heavy on my New Mexico readers, or travelers to and fans of New Mexico.

Been feeling a little homesick, so I took to Google for searches about New Mexico.

Of course there are all the sites dedicated to the aliens, the cattle mutilations, La Llorona and the chupacabra.

And I find a LOT of sites that want to tell me how weird my homestate is.

Weird huh. Is it?

Hmmmm. I don’t think it’s weird at all.

Honestly, is it just because I’m from there? I didn’t find many of these things to be odd at all.

The Chevy on a stick in ABQ. Ok, ok, I remember when that was first going up and there was a hubbub, but hardly what I’d called genuinely weird.

And the big green dinosaur, also is ABQ.

But are these really all that weird? Or just…um…bad taste?

Or how about the big metal glasses in Taos. I mean, it’s Taos fer chrissakes. The whole town is a half bubble off level.

Then there’s the “mysterious/religious” stuff like all the spontaneous healing at Santuario de Chimayo with the crutches left behind, the shrine at the top of Mount Cristo Rey or the image of Magdalena in the side of the hill in Magdalena (outside of Socorro).

All sort of your garden variety stuff, filed under “mystical.” But weird? Nah.

And of course there’s all of the natural formations: Camel Rock, Shiprock, and the Kneeling Nun to name a few. All fascinating works of geology, but hardly weird.

The rock formation that gives you the thumbs up going into Laughlin, NV and flips you off on the way out is WAY more weird than any of that. **

And remember when the Burning of Zozobra used to be kind of weird before those frapping Burning Man people went mainstream? Now everyone just thinks New Mexico ripped off the idea (we were burning Old Man Gloom first, you damn hippies!)

I dunno, maybe it’s just the desert heat that leads people to believe that the good people and place of New Mexico are weird. I suppose to someone who has never seen such wide-open spaces and deep blues skies, it could all be a little scary.

But weird? Pfffft. No way. I live near San Francisco. Now that’s weird.

Blame The Good Man for this post topic. We got into a conversation about why New Mexico put “USA” on their license plates (a vague attempt to get around “One of our Fifty is Missing” troubles, I think).

The conversation drifted into new slogans to add to the plate as we bandied them back and forth.

The winner being: “New Mexico…you don’t know who we are and we don’t like you anyway.”

They can take their “weird” and go jump in a lake.

And that’s all I have to say about that.

If any of ya’ll New Mexicans know of something really weird I’ve overlooked, let me know. I’m open to suggestions. 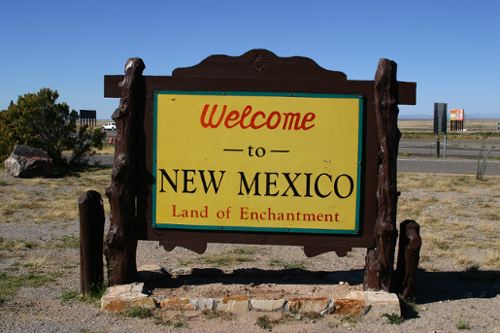 New Mexico sign image Copyright 2007, Karen Fayeth, and subject to the terms of the Creative Commons license found in the right hand column of this page.

** Nevada rock formation images from Life is a Road Trip.