Thanks to the folks who dropped me a note to ask where the heck I’d wandered off to and when the heck I would get back to blogging.

You make my heart sing. You awesome wild things.

It’s been a nutty week, wait…has it really been a week since I posted?

But here I am back in the comforting arms of My Fair New Mexico and all its glory.

And so, as Michelle correctly guessed in the comments of my New Year’s Eve posting, I have a new job and it’s all VERY exciting.** It’s a big move for me and it was tough decision. I think it’s the right move and I couldn’t be more fired up.

As though a sign from the heavens, today I discovered that one of my coworkers on my immediate work team used to work for the State of New Mexico. He is not originally from there but lived in both Santa Fe and Albuquerque for several years.

When this came to light, we had one hell of a downhome visit here at the new office. I’m a little spun around by this new job, even just two days in, and so it was completely comforting to talk about New Mexico with someone who understands. So many coworkers in California who don’t know, don’t understand. But this one does.

I’ve already offered to bake him biscochitos and we’re planning how to get some green chile up in this place of employ.

And speaking of New Mexico, I’d like to share my new badge photo with you because, honestly, I think it took the roots of my raising to get me to this point. 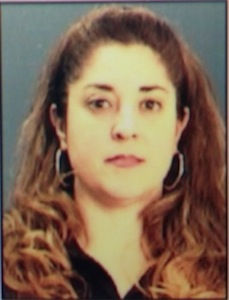 When I first looked at it I thought, “I look like a bad ass.”

When I showed it to my husband, he said “I like it, it’s sassy.”

When I showed it to my best friend I told her that The Good Man said, “it’s sassy.”

And then I was super happy.

I’d like to think I learned from my chola sisters in my early years. They taught me a lot of things, including burning the end of my eyeliner with a lighter and how I should take my earrings off before I get in a fight.

Ok, to be totally upfront and honest, the look on my face isn’t my inner bad assitude finding its way to the surface. It’s really just me looking at the weird badge office set up and thinking “which of these two different cameras are they using? Where do I look? What is going on back there? Do they really know what the hell is going on and when are they going to…oh damn…they took the picture.”

Badge office confusion converted into “I will cut you” is ok by me!

**Michelle also guessed I was either pregnant or adopting. Nope and… : shudder : Thanks for keeping me on my toes!