Ok, it started with an article from Cracked.com titled 14 Photographs That Shatter Your Image of Famous People.

So I took a look.

And in the course of those fourteen images, this one came along. (Click for a larger size) 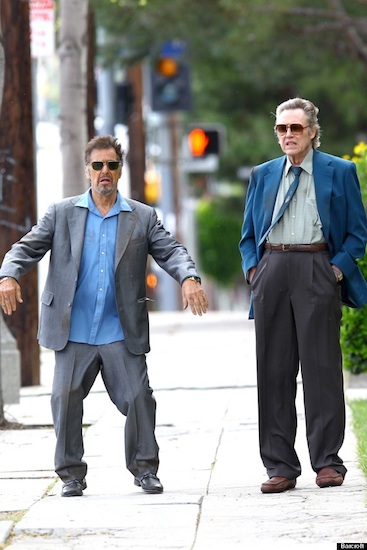 It’s Al Pacino and Christopher Walken, but what the HELL is going on? Please tell me this is something from a movie?

My fascination with this image led me to the Awesome People Hanging Out Together Tumblr….which I guess is a pretty popular site because it was named to Time’s list of the 30 Must See Tumblrs.

None are quite as fascinating at this one, but there’s some pretty good stuff in there.

Meanwhile…I must construct stories in my head about the Pacino/Walken photo. Neighbors out for a stroll? Just escaped from the home for doddering elderly actors? LSD? LSD flashback?

I mean seriously? What?

Image originally posted on the Awesome People Hanging Out Together Tumblr on April 17, 2012.

This week’s Theme Thursday is: neighbors

From The Department of Not Very Surprising

In a poll released Tuesday by the Public Policy Polling, California was the least popular state in the United States. Only 27 percent of Americans hold a favorable view of the Golden State compared to the 44 percent who view it unfavorably.

The gap of 17 points puts California far behind Illinois (19 favorable, 29 not) and New Jersey (25 favorable, 32 not) as the least liked state in America.

Worse than New Jersey? That hurts.

And further from the Not Very Shocking Files:

Democrats love California; Republicans can’t stand it. The opposite is true of Texas. 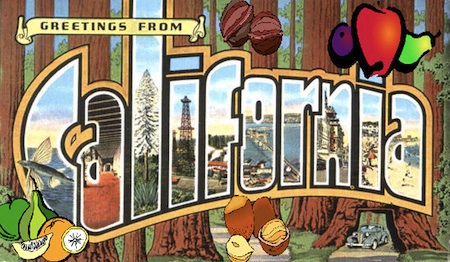 Despite the yoga, the muscle pain, the ooooohming and the visualizing, I’m still massively creatively blocked when it comes to writing, especially of the fiction variety. This is the most painful and prolonged period of writer’s blockage I’ve ever experienced, and I can see why some of the greats like Hemingway would drink themselves into a stupor over a situation just such as this.

Amazingly, I’m still able to crank out blog posts. That’s probably because my blog posts are mostly whatever random weirdness happens to be on my mind on any given day. To me, writing a blog post is like I’m having a conversation with you, the reader.

I always was a good talker.

I imagine if you knew me in real life, you’d find I talk much like the way I write here on the ol’ blogarino. I’m quite grateful that I am able to keep these blog posts going. They are a lifeline. Proof that I’m not completely over, left with a life of envying somebody else’s art and not making any of my own.

As I often do when the ol’ noggin is backed up, I’m going to the random word generator to help boost me along today.

I clicked and it presented me with the word: Phoenix.

Should I get all literary and talk about the bird that bursts into flames then rises from the ashes?

Nah. Too metaphorical. And a cheap one at that.

Let’s talk about that wacky town, shall we? A place I tend to refer to as “The Surface of the Sun” when discussing it amongst friends.

Phoenix and I have a weird relationship. There are things about the town that I absolutely adore. Attending a Spring Training game at Scottsdale Stadium is chief among them.

Watching baseball on an 80 degree day while wearing shorts and knowing it is rainy and bone chilling cold back home in the Bay Area is something I truly, madly, and deeply love.

But then there are times like, oh say…August, when there is really very little to love about Phoenix. Now, I am a desert girl, but I come from high desert where when the sun goes down, the heat becomes tolerable. 100 degrees at midnight isn’t cute and it isn’t funny.

Sometimes when I visit Phoenix, I feel like I am in my groove.

Sometimes I visit Phoenix and I feel like I couldn’t be more out of place.

Phoenix confuses me. It’s an incredibly large conglomeration of mini-neighborhoods trying to be just like Los Angeles when it grows up. This makes me mad at Phoenix, because parts of that town have their own personality, and it’s a good personality.

But then I turn a corner and there is another adobe colored stucco’d strip mall gone up and I think “Really, Phoenix? You’re better than that.”

Or as my dad would say, be yourself fer chrissakes!

I’d bet that there are Phoenix denizens who would take umbrage to what I’ve just said. I’m not here to offend, just trying to understand why a town with so much going for it is so confusing sometimes too.

Well, I’ll love it for the good stuff like baseball, visiting my Mom, and the occasional visit to the Sugar Bowl. And I’ll leave the overly stucco’d strip malls for someone else to love. 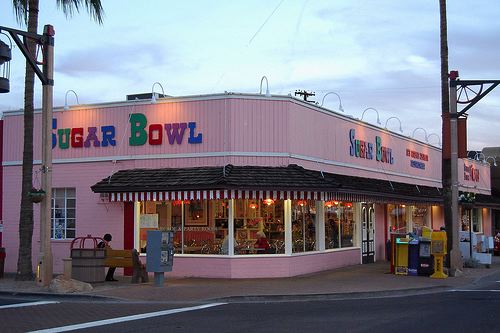 If you haven’t been to the Sugar Bowl, you are missing out.

A Face From The Past

While visiting L.A. this weekend, we had a chance to pile into a convertible and take a drive up and over the hill to Burbank.

It was there I ran into a childhood friend.

A face I can never forget.

Last time I saw this creepy somnabitch he was in Albuquerque, standing on the corner of San Mateo and Montgomery, right across the street from Del Norte High School.

He showed up once or twice in the high school parking lot, too. Looking an awful lot like this: 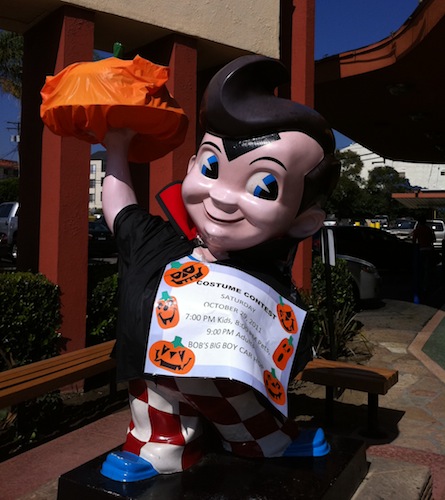 In fact, over the years he hasn’t changed a bit.

Ok, sure, that hairdo is wildly outdated. Those shifty eyes make me nervous. And those plaid pants! Ugh!

But he still cooks up a real fine breakfast. 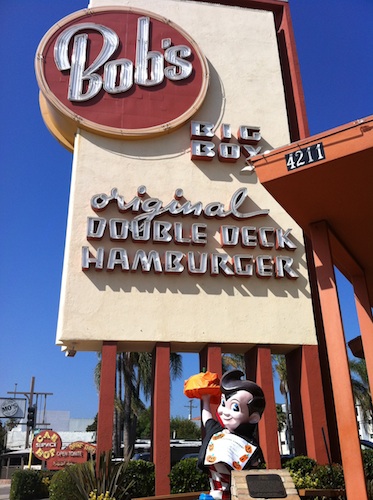 Photos from the Burbank Bob’s Big Boy, originally opened in 1949. All photos by Karen Fayeth and subject to the Creative Commons license displayed on the right column of this page.

And so, after many visits and many tries, I finally found the way to really, really *get* L.A.

The secret is this…if ya are gonna go to L.A., then really go to L.A. proper. None of this staying in Burbank or camping out in Pomona. No.

L.A. proper, and more succinctly, Hollywood, is the center of what matters. All the rest of those suburbs just serve to water down that which makes L.A. a goddamn fun place to be.

So you gotta stay in L.A., or to quote Wang Chung perhaps you live and die in L.A., and you only visit all of those other surrounding places if you need to. Mainly, you stay put, because there is plenty to see.

As my amazing cousin lives in West Hollywood, we wanted to stay somewhere nearby. Walking distance, even. The Good Man scored us a room on the Sunset Strip, and that’s where I finally learned to bond with a town that has vexed me for years.

But I don’t care.

Our hotel was directly across the street from the famed Rock n Roll Hyatt also known as Riot House. We were also next door to the famed House of Blues.

So here’s my recipe for finding the soul of L.A.:

You get off highway 170 and you roll past the Hollywood Bowl. That street is called Highland. You stay on Highland until you get to the corner of Hollywood and Highland. Is that address familiar? Yes, it’s where the Kodak Theater is located, that place of red carpets and award shows. Be careful to look only at the Kodak, because if you look in the other direction it’s not quite so glamorous.

Turn right on Hollywood and drive slowly (you have to, traffic is a bitch) and let Grauman’s Chinese Theater roll by your car windows. For such a profoundly historic place, it’s so physically tiny.

Keep rolling. No need to stop here. See the stars on the sidewalk whip by as you pick up acceleration and keep rolling down Hollywood Blvd. As you leave the jam packed area, you find yourself among 1960’s era apartment buildings and that uniquely L.A. look of tall palm trees on both sides of the street. You’ve seen this in the movies. It’s as familiar as if you’ve been there before.

Onward to Fairfax where you take a left, then at the next light, turn right.

There you are on Sunset. Beautiful, ugly, magical Sunset Boulevard.

Park your car, check into the hotel, ditch your bags. Get out on the street and walk.

Yes, I said walk. Screw what the Missing Persons said about nobody walking in L.A. In this part of L.A., you do. If you don’t, you’re sorely missing out.

From the Rock n Roll Hyatt, walk west on Sunset past the House of Blues. There’s the Viper Room. There’s the Whiskey a Go Go. There’s the Roxy Theatre. Do you like music? Have you ever listened to Rock and Roll? Well hell, you have got your head and your feet solely in the middle of history, baby.

But there’s other things to see along the way. How about Book Soup, L.A.’s answer to San Francisco’s City Lights? And the Rainbow Bar & Grill. And even a few empty shops and a whole lot of restaurants, new and old along the way.

You note, as you pass each shop door, that everyone has etched into the glass “Established in ____” Yes, everyone has to publicly announce the year they got their start, even if it was only last year.

And when you comment on this to The Good Man, he gives you the quote of the day, perhaps of the whole trip: “In a town with little authenticity, everyone has to manufacture it.”

But then you take a turn somewhere. Doesn’t matter where, could be Olive or La Cienega, but head south and walk down the hill. Because Santa Monica Boulevard is down there and that’s a whole other place entirely.

Now you are smack dab in the heart of West Hollywood, and yes, the heart of the LGBT part of Los Angeles. There are less historical places to see, and more of just a thriving neighborhood. This place is practically buzzing with life. This is one of those “ain’t got no destination, I think I’ll just walk” kind of places.

Well, ok, I’ll turn off Santa Monica and drop into The Abbey because even though I am straight, I’ve never had a bad time at this place. The drinks are strong and the music is loud and the atmosphere is crazy. And lots of fun.

And it’s on a warm Fall night on the Abbey’s patio, over the top of a vodka tonic with The Good Man and my supremely cool cousin that I think, “you know….this ain’t so bad.”

Shove over, Frank Sinatra. L.A. might be my lady, too.

(No worries, I still hate the Dodgers.) 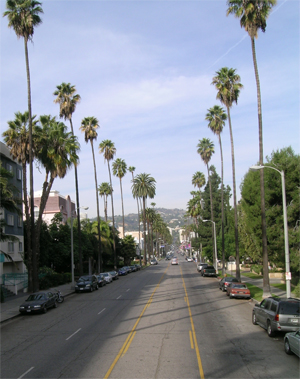