A couple days ago I mentioned that I had been in Chicago for a writer’s conference at the end of March.

I’ve been to Chicago many times (as in passing through on my way elsewhere) but I’ve never really been to Chicago. When a couple ladies from my class said they wanted to go into downtown for dinner I was totally on board.

We hopped on the L and headed from Rosemont into downtown and walked around.

The ladies were intent on seeing Cloud Gate, colloquially known as “The Bean” and I was onboard.

It just so happened that the March theme for my photography club was night photography, so I took along a camera just in case I saw something good.

The Bean is like any touristy object, it’s been photographed thousands of times. I had no idea what I could do to improve on what’s already been done, so I just had fun with this shiny reflective piece of art.

Here’s what I got: 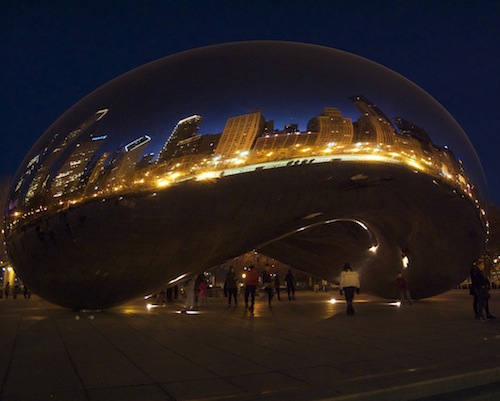 I think the Chicago skyline is so beautiful and a bit iconic as well. I love that at certain angles, the polished surface of the Cloud Gate just disappears into the sky like liquid silver. It’s really cool!

My favorite part of the whole night was when my fellow travelers and I had found our way to Millennium Park and were a bit lost trying to find The Bean inside the park.

At one point, a bunch of kids came running and flowed around me like a stream while they pointed and shouted “El Frijol! Mira! Mira! El Frijol!” I smiled because I knew I was near. And I laughed because of course it’s called El Frijol. My New Mexican pride stool tall as I found that big shiny bean.

I love the shot, but I wasn’t sure anyone else would. Turns out this photo took second place in the voting for my photography club’s monthly challenge, and that makes me happy (missed first place by one vote!).

After The Bean, we found our way to Giordanos because hello Chicago style pizza! Can you believe I forgot to take a photo of that delicious deep dish? Oh well.

This photo of Cloud Gate brings me good memories of downtown Chicago. I look at this beautiful bean photo and I smile.

Chicago is such a great city. Really top notch. I can’t wait to go back.

Last month I found myself in Chicago attending a writer’s conference. The event was sponsored by a large publishing house and I went to learn more about the publishing industry. Boy did I.

Part of the weekend also had us working on some writing exercises. We were given a topic and told to write about it for ten minutes.

I’m pretty good at these off the cuff wind sprints, so I was sailing along nicely creating the words and feeling all of those blocks melt away.

That was until we got to the prompt: “What’s the one thing you won’t write about?”

Ugh. Well. The snarky voice in my head kicked in, saying things like “well if it’s something I won’t write about, why would I write about it here? In this uncomfortable chair. With 500 of my closest friends in attendance?”

Then I started thinking, what really IS the one thing I won’t write about?

I know what it is, but I’m still not ready to write about it.

It’s grief. My overwhelming grief is the one thing I just can’t write about. Not yet.

Both December and January ushered in tremendous losses for me, one after the other, and though I’m told I have to “just grieve” and “get it out” and “go through the stages” I find myself a bit at sea. There are times it shows up inappropriately and I cry so hard I wonder how I will ever stop crying.

When I do finally stop, I become near catatonic for the rest of the day.

There are times I know it’s sneaking up on me and instead of trying to head it off, I am able to find a way to hide in the bathroom or outside or in my car and let it happen. A little.

And sometimes I simply have to tell the freight train that no, it doesn’t get to run me over today. When I head it off, push it down, it only means the grief builds up a bigger head of steam for the next time.

It is a demon and I am wrestling with it. And no, I’m not ready to write about the details. It’s too tender, too fresh, too painful.

As if one can ever really be free of grief. Actually, that’s part of the problem. This fresh and overpowering grief has ripped the lids off of the many other losses I have experienced so I get to go through all of that again. As if it’s new and present and today.

So yeah, letting it all out, that’s probably what I should be doing.

And it remains the one thing I won’t write about.

But I will write about it. Someday.

Maybe this post is just one small step in the right direction. 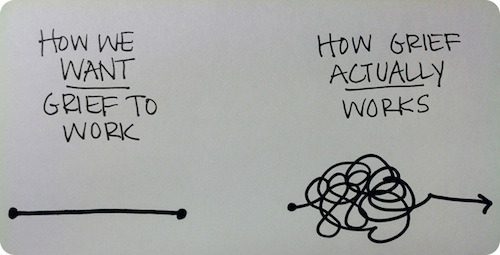