Blast from the past

Blast from the past

I’ve made it no secret here in these pages that I am a rabid baseball fan. I believe I’ve spoken most frequently of the San Francisco Giants. But I actually have another love. A first love. The one that wooed my heart for the very first time.

But that…in a minute….

I also have another love (a second love, I suppose) here in the Bay Area. In fact, this one came to me soon after I moved here. Before I’d even starting going to the “big boy’s” club.

I had occasion last night to take in a last day of August game with the San Jose Giants. They are the single A farm team for the big boy Giants and are a hell of a lot of fun to watch.

When I moved here in 1997, I worked for a rough and tumble company and supported a team of folks who worked really hard doing very dangerous work. As such, it made them a tight knit group. I had the privilege of helping them in their work, and they took me on as “one of the family”, and that family loved to have group outings. So not long after I’d been living here, they invited me out to the ballpark. I was already a huge fan of baseball so I happily agreed.

What greeted me at San Jose Municipal Stadium was unlike anything I’d ever seen. Built in the early 1940’s as a WPA project, Muni had this amazing old school, Minor League charm characterized in movies like Bull Durham. Only better.

Muni comes with something called Turkey Mike’s BBQ. A glorious bbq area with picnic tables and ribs to make you weep. It was the *best* food I’d ever enjoyed at a ballpark (to this day, still is), and we, a large group of congenial coworkers, sat at long tables and ate, got sauce on our cheeks and enjoyed the sun.

As the game got underway, with events, contests and fun at each half inning (the “Smash for Cash” still reigns supreme in my mind. An old panel truck careens out to the field, stops, and three of the San Jose pitchers compete on behalf of three fans. They throw baseballs at the truck and if they smash out a headlight, the lucky fan takes home $100), I was overcome with a sense of melancholy. A memory. A flicker of remembrance of my first love. And being that I had just moved here, the memory was powerful and the homesick overwhelming.

Needing to stretch my legs, I walked down “in the tunnel” to use the restroom and get something to drink. I strolled around taking in this new-to-me stadium.

And as if by kismet, I saw it. This old stadium, like many others, honors it’s competition by displaying pennants representing each of the opposing teams in their same league. It is a pretty common practice. This stadium had them painted onto the walls, sort of a “walk of fame” as you go through the tunnels. And when I saw it, I had to weep. Literally, tears squeezed out and I stared, agog. It was a reminder, a sign, a connection.

I was a scared to death kid in the big town, just barely moved in, but fate saw fit to give me a moment of comfort, as if to say “it’s ok kid, you can still be a New Mexico girl in California. No need to become something else. It all fits together, wait, you’ll see.”

And having been to Muni hundreds of times since that first time, now over ten years ago, I still always stop, give thanks, and physically lay hands on that symbol, for luck, for solidarity, for a connection to that girl I was ten years ago. That piece of comfort still brings me comfort.

Last night I decided to take a photo: 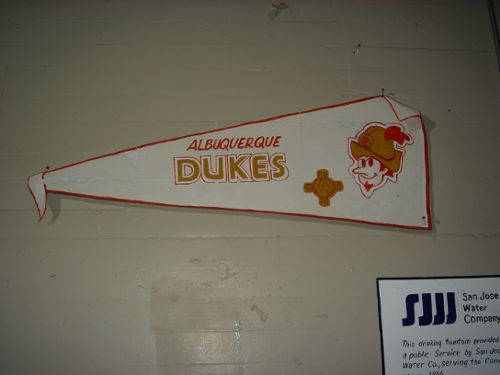 Seeing it that first time made me all the more sad because The Dukes had already left Albuquerque, moved to Portland, leaving my fair city with no baseball team. I yearned for them when I first saw this reminder, knowing the Dukes were no more, but remembering them as my first love. The one that mattered. I remembered the crappy Albuquerque Sports Stadium where they played, but that was assuaged by dollar beers and dollar hot dogs. I remembered sitting in the afternoon sun watching the game. For a brief while on a co-op job from college, I worked downtown, and it was easy to jet out from work at the end of the day and take in an evening game.

In their time, The Dukes were good. Really good. I was always troubled that they were a farm team for the Dodgers (no, I will not give The Bums any linklove from my blog!) but was able to look past that. I was even able to look past the fact that the odious Tommy Lasorda once managed my beloved team, but that was well before my time, so I could try to forget….

So The Dukes may be gone, replaced in 2003 with the Isotopes (yes, I proudly wear a ‘Topes shirt around here, though have not yet had the pleasure of taking in an actual ‘Topes game), but the San Jose Giants make a nice replacement in my heart.

And that link is still there, that tie, that very symbol, to me, of the blending of my Albuquerque roots and my Bay Area branches. That Dukes pennant with the smiling Duke of Albuquerque is still there on the wall for me to see, touch and remember every time I’m at the Muni. And that gives me esperanza.

Remember the old radio ads? “The Dukes are coming up…coming up swinging”?? It still rings in my head.