If there was ever a signal of burgeoning growth, not just in population, but devices as well, it has to be the area code split.

Soon after I moved to the Bay Area, we had a split. That was during that much ballyhooed Dot Com boom (remember that? Yeah…).

When I moved I had that coveted 415 area code (the area code of San Francisco). I had it a few months before it split, owing, they said to the cell phones, faxes, all the people working from home with extra lines and the fast growing population.

There’s been a few more splits since, though none affecting me. I’m still rockin’ the 650.

Our fair New Mexico had held firm all this time. I know there were rumors of an area code split a few years back, but it looks like it’s here now. The 505 will now become the 505 and the 575.

: sniff : Our little state is growing up!

I guess I didn’t think it was true, hearing only secondhand from friends, until I saw this article in today’s Albuquerque Tribune (while it’s still breathing).

Rage on, Land of Enchantment! Rage on!!

On second thought…I’m not sure I’m happy about all this growth. Too many yahoolios jamming up the Big I yapping on their phones? Too many houses springing up outside of Las Cruces? People actually knowing what we know…that New Mexico livin’ is pretty easy? Ugh!

Slow down, Land of Enchantment! Slow down!!! 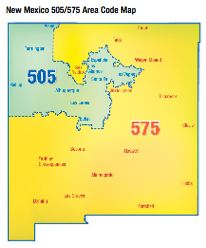