I have a crush.

Ok, to be fair, I have the biggest crush of all on my husband. He makes my tummy go all googley.

But I also have another, less powerful, crush.

A crush that I’ve been open and honest about with my spouse. He is ok with it. Or, while maybe not ok with it, tolerates my geek girl crush because that’s just the sort of kind and understanding way he has with me.

You see, my crush is not about the usual sort of person you’d think.

Not even someone who you might call a celebrity. But someone who is a known figure…at least in the UK and to watchers of the BBC.

I have a crush on Mike Embley, lead presenter on BBC World News.

It’s informative and not inflammatory. It’s not televised drama, it’s actual news from around the world. I’ve learned a LOT from this show and I chalk much of that up to Mr. Embley who presents the news in a professional and calm manner with a slight tinge of a sense of humor burbling just below the surface.

Plus, he cuts a stunning figure in a pink shirt and tie with a dark grey suit.

Truth be told, I find him rather irresistible. Brains and humor reel me in every time (just ask The Good Man who has both in spades, and might I mention, cuts a rather fabulous visage in a suit, himself).

Anyhow, yesterday, I was taking in the world news from the pleasing voice of Mr. Embley, and at the end of the show, he said, “You can follow me on Twitter at @bbcmikeembley.”

Well that was that.

I looked him up and began following him straight away.

In reading his Tweet stream, I saw that he seems to be rather responsive to his followers. In many cases, he thanked people for the follow and answered their questions.

karenfayeth @bbcmikeembley I’m pleased to find you on Twitter. I very much enjoy your BBC World News broadcasts!!

bbcmikeembley @karenfayeth Happy to be Twting. Don’t as much as I’d like but that mostly cos busy with the brdcasting. Or kids. Or dog. Or v bad guitar.

I appreciate he left out vowels to get to an economy of characters, and still managed to be very well spoken.

I am simply all a flutter to receive a reply!

When I showed it to my husband, he replied, “Oh my, you’re a news fan geek. Who would have thought?”

He says this because I’m pretty steadfast in that I don’t watch the news.

But for one show. The one presented by my new Twitter friend…Mr. Embley. 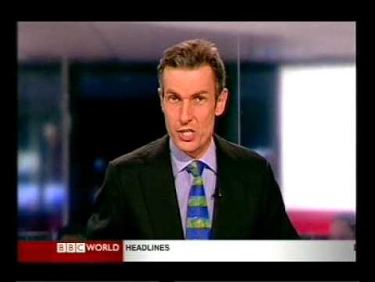