Long overdue but not forgotten. Thoughts plague my brain still, despite the news having dropped off the front page of SFGate.com.

Let’s talk about the oil spill here in the Bay Area. Here’s a high level of the events.

On Wednesday, November 7, the Cosco Busan, an 810 foot long container ship, collided with the base of the tower on the western span of the Bay Bridge.

When I first heard this breaking news story, my first worry was for the bridge. Memories of the Bay Bridge collapse in 1989 are still very clear in my head. The Bay Bridge is a major thoroughfare for the people of the Bay Area, and even so much as a lane closure can affect traffic for the entire Bay Area. It’s one of those roads that can never close because even in the heart of the wee hours of the morning, there is heavy traffic. If you’ve seen the bridge, the western half is beautiful, the eastern span looks like Tinker Toys. That’s because it had to be hastily repaired after the earthquake because of all the reasons above. It ain’t pretty, but almost twenty years later, the tinker toys still stand. The ship, however, hit the “pretty” side.

So, as I said, first, I worried about the bridge. Reports started to come out that there was no apparent damage, as the intricate fender structure on the bridge towers to prevent such issues performed as designed. But then soon, another problem came to light. The collision had ripped a 160 foot long hole in the side of the ship at ten feet above the water line. News reports came out that said the ship was leaking fuel oil, but that the crew had taken quick evasive action and contained the spill. They transferred oil from leaking tanks into other tanks. The Coast Guard reported that 8,000 gallons had spilled and action was being taken to begin clean up. Given that the Exxon Valdez spill was in the millions of gallons, all indications were that this was a non-event.

It seemed all was well. But that was not quite true. Here’s where the news reports start giving conflicting details. Finger pointing regarding delays in responding. Accusations about the ship’s captain and crew. Hostile reports of an uncaring Mayor who knew of the spill but left town on vacation anyway. I may never personally know exactly what happened or the truth of all the finger pointing, but I will do my best to report the facts as I know them with a fair peppering of my opinions.

At the end of the day, 58,000 gallons of fuel oil were spilled into the Bay and within hours it was washing up on shore nearby at Crissy Field and Baker Beach. Due to the tide patterns, Marin (north of the Golden Gate) was particularly hard hit.

But here’s where it starts to punch me right in the gut.

I wouldn’t call myself an uber environmentalist, but I certainly do care a lot about the world in which I live. So I was torn up about what effects this spill might cause. The aquatic effects of all this is still fairly new stuff for me being a New Mexico girl. But this one part I “got” right away.

See, this time of year is crab season. During my first year in residence here, I was introduced to a happy Bay Area tradition. Fresh crab for Christmas dinner. My friend who adopted me in those early years would drive to Half Moon Bay on Christmas morning, buy crabs out of the boiling pots, bring them back and we’d dive in with fingers and teeth and happy yummy noises dunking sweet meat into melted butter and slurping it down.

And just before this accident, I’d heard the annual news reports that the crab fishermen had settled on this year’s price for crab and the season was ready to begin.

But wait. Now, we have a problem. We now have a toxic mess floating on the very water where the crabs are caught.

I believe the season is due to start December 1. But wait, you say, isn’t that enough time for the spill to be cleaned up? No, not really. See, the oil floats along for a while, then it sinks. And when it sinks, it contaminates those young crabs that would be prime for the taking in the month of December.

Over the weekend of November 10 and 11, I was in Bodega Bay. Located North of San Francisco, it was a fantastic getaway and of course, The Cute Boy™ talked about the spill on our ride as we went over the Golden Gate and stayed at an ocean side hotel.

While walking around, we saw stacks and stacks of crab pots, primed and ready to go out. I smiled in spite of myself. I do enjoy crab. We walked over to the visitor center and while looking at maps, overheard the woman there talking about the impact of the oil spill on her community. The crab fishermen are mostly union, so in an act of solidarity, the Bodega Bay fishermen agreed not to go out until the San Francisco fishermen can go out.

What this all means is that people who work really hard for a living are going to have a lot harder time this year making ends meet. At Christmastime no less. All because one guy had a really bad day at work (also a hard job. I don’t imagine steering a boat that big is any easy peasy thing to do) on a really foggy day.

On the way home from our trip to Bodega Bay, we drove down by Ocean Beach and saw people in hazmat suits cleaning up the mess. It really brought it right home to me. This was no longer something I saw on the news. This was real people with real issues fighting the good fight for real aquatic life in the area in which I live.

I have tried to find an exact number of birds they think were contaminated and can’t find a solid answer. Reports say some 20,000 have died. Many more have been cleaned up and some released back into the wild. Those numbers of the dead may be low because it’s hard to know how many were eaten by predators or sunk in the water. If eaten, the cycle of contamination continues.

Also, the tide surges can send the oil back to beaches that have been cleaned causing them to need to be re-cleaned again and again.

There are no two ways about it. This was a disaster. Not so large (on the Valdez scale) to garner much national coverage (tho my friend over at Live from Silver City, a resident of Washington DC mentioned it in his blog). But no less an environmental crisis. And a huge impact to the thriving fishing community of the Bay Area.

Latest salvo was that fishermen from Oregon brought in crabs to sell, but were soundly rejected. I also stand behind my local fisherman. And it pains me, but I’ve decided to stop eating any crab at restaurants until I hear that the local guys can sell their catch. It’s one of my favorite foods (I have it probably once a week) and crabs come from all over, but it’s my own personal act of solidarity.

As for me, I’d actually planned a trek to Half Moon Bay this year for annual crab feast. I’ll be watching the news and various sites to see if it’s safe. Fishermen haven’t gone out yet to set their pots, and I’d like to think there will be some testing for safety before the catch is sold. 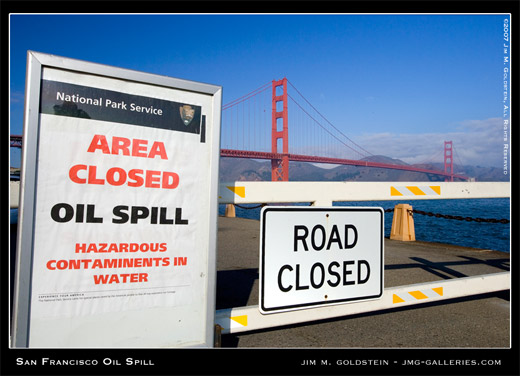