Another time, another place

Another time, another place

The year was 1988. Hmm…I believe we’re talking Fall semester of school? My memory is often weak. If so, then the month would have been August, or maybe September.

It was warm, I remember that. Then again, it’s always warm in Las Cruces.

I was a student at New Mexico State University. Enrolled in the College of Business.

I was also a member of a social sorority. Yes, now it can be told. Me, I was a sorority girl. Though it didn’t mean what you think of when you think of that stereotype.

I had only joined the group just the semester before. It was all pretty new to me. But summer was ending and it was time to engage in “rush”, that every semester ritual whereby you try to convince new people to join (new members, the lifeblood of any organization).

We had to practice for days. Learning songs, doing skits, working on conversation skills, coming up with party theme ideas. Figuring out how to be little drone salespeople, I realize now, in my later years.

So we’d line up, white Keds sparkling in the New Mexico sunshine, shorts perfectly creased, hair teased impossibly high. We were a’twitter with anticipation about meeting the new young ladies who would come to our house to learn about us, and our particular sorority.

They would gather on the front walk and we’d run out, do some awkward singing on the lawn, then select one of the girls, cut her from the herd and bring her inside.

From there, we’d engage in some banal conversation for about ten minutes. Then with the subtle cue, we’d “switch partners” and go on to the next girl, engage is similar inane conversation, and on and on. So it went.

At the end of the day, we’d compare notes and decide who we wanted to invite back the next day.

So on that fateful day back in 1988, the theme of the party was somehow something Jamaican. We’d adapted the words to Bob Marley’s “One Love” to fit in things about our sorority (a travesty, if there ever was one).

For reasons I can’t explain, yards and yards of camouflage netting had been hung from the ceilings in the house…to really bring in that tropical feel?

Being the well-behaved drone, I lined up, I ran outside, I sang, I selected, and dragged this poor young lady into the house.

Her name was Kathleen.

She was extraordinarily tall, dark hair, face full of charming freckles, and the brightest blue eyes in the world.

At six feet all, she had to spend the day ducked under that low hanging camo net, but was a good sport about it. She was a little shy, but we hit it off. We saw the world in a similar way, and I really thought she was cool. Her mom had been a member of the same sorority, what they call “a legacy,” so she was pretty odds on to make the cut.

Ten minutes passed fast, and I moved on, reluctantly. Later, in the voting round, I gave her a big thumbs up, as did all the others.

She soon joined, became “a pledge” and I got to know her more. We became distant friends, she ran pretty thick with the girl who was my roommate. They did everything together. But we were friends and always got along.

The story goes on at some length from here. Too much to tell, really.

I’ll fast forward a bit. A couple years later, some adversity hit Kathleen’s life. Hard. Big. Overwhelming. In a bid to deal with a pending breakdown, she did some stuff that made sense in the mind of youth. Some crazy sh*t that seemed like a big deal at the time, but in my now grown up eyes, looks incredibly not even noteworthy.

Because of all of that, she lost a lot of friends back then. People with small minds who didn’t want to understand. People who maybe weren’t really friends to begin with.

But through all that, she didn’t lose me.

In fact, that adversity she struggled through moved us from being pretty good friends to rock solid life-long best friends. 99.999% of the fun I’ve had up until I met The Good Man is directly attributable to her. Pretty much every wayback machine moment I have written about on this site, she was either there or more likely was the catalyst.

A lot has gone on in the twenty-plus years since. We both graduated, grew up, became actual adults, all against our will.

Tomorrow evening, I have the honor of driving to the airport to pick up my best good friend of now some unbelievable twenty years. She will be here for a weekend that likely will move way too fast.

Attached is a very small photo (sorry about the size, I don’t have the original handy) of my best friend and me on my wedding day. I wouldn’t have anyone else at my side. She’s just said something that has cracked. me. up.

I love that girl. I can hardly wait to see her! 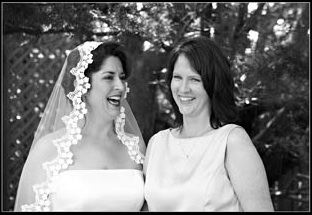 P.S. Not to be all selfish, but to have both my best girlfriend and The Good Man together this weekend, two people who are always in my court, it’s kind of all about me, and…well, hell, it’s *good* to be me!