And Then The World Fell Off Its Axis

And Then The World Fell Off Its Axis

Woke up early this morning after a terrible night’s sleep, or rather, lack of sleep. Rising out of the bed, I was keenly aware of a feeling of anxiousness deep in my stomach.

I had an 8:00 video conference with London, and I worried about being able to make the equipment work for this very important meeting.

I got to work early, and as I walked around the nearby lagoon to get to the videoconference building, I saw a single Coot paddling along the smooth as glass surface.

Feeling anything but optimistic and keen to cheer myself up, I started singing “Good Morning, good moooorning, to you!” (a la “Singing in the Rain”) to the confused Coot.

I laughed at myself, and laughing felt good.

Turns out I had nothing to worry about the videoconference. It went off without a hitch and when it was over, my mood had improved greatly.

To add to the day’s improvements, two meetings directly following the videoconference were cancelled. I was given a gift of my morning, and that’s valuable.

Back at my desk, I fired up the streaming radio and dug into work.

Tip tapping away at the keys, I heard my iPhone buzz.

A text message from The Good Man. “Did you see today’s SF Gate?” he asked. The SFGate is the local newspaper for San Francisco.

“Not yet, let me look,” I replied, figuring there was something interesting there to see.

The page opened and I scanned the headlines, but didn’t latch on to what The Good Man wanted me to see.

I saw the photo first. Then the headline. My friend and consummate Blues Man Johnny Nitro has died.

Over quite a few years of hard living he’d had a little trouble with his ticker. His heart as big as the world had a mechanical flaw.

I’d last seen Nitro in August at the book signing for Saloonatics, an amazing book of photos by my buddy Scott Palmer that honestly captures the thriving blues scene at The Saloon in San Francisco’s North Beach.

Even though I hadn’t seen Nitro for many years, he still wrapped me in a tight hug that lasted a long time. He was genuinely happy to see me, and I almost cried for joy at seeing him again. I introduced Nitro to The Good Man and as they shook hands, I felt at home.

Back in 1997 when I moved to the Bay Area, I knew how to get to exactly one place in San Francisco: North Beach. With trembling knees and shaking hands I’d force myself to drive to North Beach on the weekends. I’d have dinner and a couple fortifying drinks at Sodini’s, then I’d go to one or both of the blues clubs located on Grant Street.

It didn’t take long before I was considered a North Beach regular. I got to be friends with the people who worked in the restaurants and bars, the musicians, and other regulars.

The people of North Beach look out for each other. We take up for our own. I was welcomed into the family by a group of good, hardworking people.

Nitro was one of those people back in the early days who closed ranks around a little hayseed from New Mexico and let her know she was going to be all right.

And I was. With these seasoned city folks to help me learn, I turned out all right.

Nitro had a deep catalog of blues tunes ingrained in his DNA. Name a song, he could play it. He’d fire up that blue and white Strat and make it sing.

Nitro made me laugh and he made me cry. He played music that spoke to my soul. I owe Nitro a debt of gratitude that now I’m afraid I’ll never be able to repay.

But he had another quote that seems more fitting.

In the middle of a soaring blues riff that filled The Saloon with sound, Nitro would step up to the mike and holler “Riiiide!”

And for you, my friend, wherever you are: Riiiide! 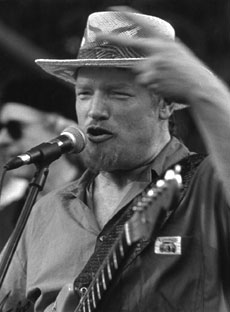 Photo by Scott Palmer, taken at the 2000 Rumsey Blues festival. Yes, I was there…..