There I am, a random sunny weekend day in suburban Northern California, with a bag of groceries in my arms and holding hands with my husband.

We’re headed to the car in the parking lot when a low, slow Honda Civic rolls by. The car has been lowered, the wheels are miniscule and from inside the car comes some techno music. Not the multilayered computer-mixed techno of this modern era, but a thin synth-pushed techno that was quite reminiscent of the dance club music of the late 1980’s.

And suddenly I am no longer on a grassy knoll outside of Whole Foods in suburban California, but I’m wandering over the Paseo del Norte bridge and stumbling down Avenida de Juarez.

And I am inside Alive, a bar just over the border in Juarez, Mexico. If I listen hard enough, I can hear the sound of tequila slammers hitting the bar, syncopating with the terrible music blaring from the terrible sound system.

Alive, a venue located underground (the irony was not lost on me) with a tan blown-foam covering on the walls and a trip-worthy ramp leading to the bowels of the nightclub. I’d remind myself as often as possible not to touch anything and mind my own business.

But a bucket of Coronitas and a few slammers later and hey, let’s dance!

And me with my walnut sized bladder begging myself to hold it because the bathrooms at Alive were awful. Just…frightening.

But who cares! I was young! I was invincible! I was the only responsible person in a group of very irresponsible college kids. We were having fun. In another country. With no parents in sight! Freeeedom!

Yes, I was young and in my prime and not something like 43 and worried about jobs and money and is that cereal I just bought gluten free because wheat gives me tummy rumbles and oh yeah, did I get hemp milk because by god I’m lactose intolerant too. And can you read the label on this box because the print is too tiny and I sure as hell can’t read it.

It was a fleeting memory and I told it all to The Good Man. He replied “You and I had very different lives.”

And I suppose that’s true, we did.

But I can’t shake the memory. It’s not that partying in Juarez was a particularly good time. I was always the “good kid” and worried to death about all my friends and how to get them all back home safe and intact. I worried that one of the guys would get in a fight and we wouldn’t have enough money to pay the Federales to let him go. I worried my pockets would be picked clean by the kids (I had fended off more than a few). I worried that if the time came to run that I would be the one not running fast enough.

Those times are long past, something of stories and fairy tales as I wouldn’t go near Juarez for all the tequila in the world now.

I guess that memory on that sunny California day was something like fond reminiscence? I think it is more my youth that I miss than the crappy bars like Alive and Spanky’s and The Tequila Derby.

While searching for photos of Alive, I found this story on CNN. The author perfectly describes what it was like then and what it’s like now and does a much better job than I did.

Juarez was fun – before it was dangerous. 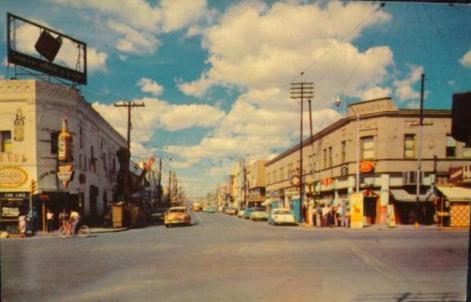 This 1950’s (or maybe 1960’s) era postcard, oddly, comes closest to my memories of Avenida de Juarez. In the late 1980’s that big bottle over the liquor store on the corner (left side of the photo) was still there.

Image from an eBay posting selling the original postcard.