As I’ve documented here on this little ol’ blog, in May of this year I spent a week of my life in San José, Costa Rica.

Having been reared in New Mexico, the Land of Mañana, I am not unfamiliar with the more laid back ways of Latin culture.

But even to me, Costa Rica was a bit of an eye opener.

People walk down the center of major roads and cars accommodate this.

Buses stop on the freeway to pick up passengers who wait between two lines painted on a guard rail. The bus drivers shout “¡andele!” as it’s not really a stop as much as a fast roll (I rode the bus in San José, an experience not soon forgotten).

If a dog happens to trot out into a major road everyone laughs and says, “¡Ay, perro!” as they stop and wait for the hound to find it’s way through. (Costa Rican’s LOOOOVE their dogs)

And directions? Forget about it. After growing up in Albuquerque with well marked roads laid out on a grid, I always carp about California’s lackadaisical approach to marking roads and exits.

Compared to Costa Rica, California looks perfectly well organized. The roads in CR go all over the place and everyone just seems to know how to get there. Thank the god (my Costa Rican employee’s favorite expression) that my Tico minion drove me everywhere because I would have been utterly lost.

And let me tell you…Google maps don’t know nuthin’ about how to navigate San José.

So this evening while winding down with a nice glass of red, I smiled when I saw this headline:

However, it wasn’t the headline that made me grin. It was this quote from the article:

“I don’t think it’s going to work”, 29-year-old taxi driver Manuel Perez said. “If a tourist tells me to take him to a hotel in whatever street, I’m going to say ‘you’re speaking to me in Chinese,’ because I don’t know where that is. I need a landmark.”

By the way, the cab drivers in CR are THE BEST. The running dialog I’d get during rides was priceless. You can’t buy that kind of entertainment.

These were my most favorite road signs in Costa Rica. They mean “give way” and were posted everywhere, on every corner and road and driveway. No one ceda’s the paso to ANYONE. These signs might as well say, “have a nice day” for all the good they do. 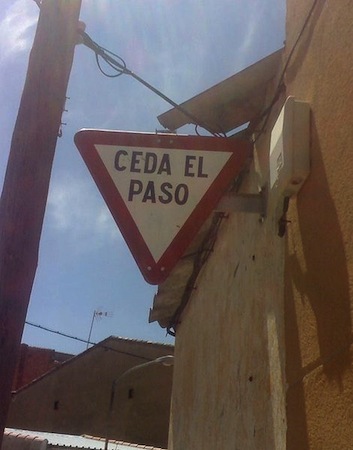 Image from Wikipedia and used under Creative Commons.