So every once in a while, I’ll read something in the daily news that grabs my attention.

And then every once in a while, I’ll read something that makes my eyes open wide, leap out of my head, fall down on the floor and roll around a while.

The following headline in yesterday’s news had just this effect on me.

“…El Paso has taken the top spot for having the lowest crime rate among cities of more than 500,000 population in the annual rankings by CQ Press, a publishing firm based in Washington, D.C.”

So, yeah, I’m gonna guess that those people at CQ Press haven’t paid a personal visit to El Paso lately.

Look, I’m not going to bag on El Paso. It is the birth place of my best friend, and that itself recommends it highly.

It’s also the birthplace of Sam Donaldson and Gene Roddenbury. So ok. Some decent talent comes from the town that Texas forgot.

Having spent a lot of time in El Paso, I could use a lot of adjectives to describe the city. I’m not sure that the word “safe” would burble up to the top ten.

I’ll be fair here. I’ll even take out the obvious concerns about El Paso sharing a border with arguably the most dangerous city in Mexico.

In the past year, approximately 50,000 additional troops were located to Fort Bliss, an army installation in El Paso. Those 50,000 include both returning troops and soldiers left after bases closed in other states. That 50,000 is soldiers only. Add in spouses, kids, other family and the number of new residents rises.

Then add in the high number of people who are fleeing the violence in Juarez and the numbers climb even higher.

Put it together and you’ll find a city bursting at the seams. You can feel it when you visit, the town is growing so fast that infrastructure is having a hard time keeping pace.

That means busy police, fire and emt forces are being overextended during a period of economic downturn and government cost cutting. Sure, all of the new city residents will pay taxes into the economy which will help shore up infrastructure, but that kind of growth takes time.

And then let’s talk about the ongoing immigration flow through a border town like El Paso. My best friend’s folks live within visual distance of the border highway’s Zaragoza bridge. They have bars on their windows. In their some forty years of living there, they’ve found desperate illegals hiding in their yard. Neighbors have been robbed. Violence occurs (but isn’t often reported). I’ve been sitting in the back yard and heard shots fired.

El Paso is a fine town with a rich history. There is a lot to offer the residents who live in that city. Reasonable real estate costs. The Franklin Mountains are beautiful. UTEP is a fine university. Great weather. Even lots of job opportunities. It may even be a relatively safe city. But safest in the US? I have to question that assertion.

Evidently, I’m not the only one. 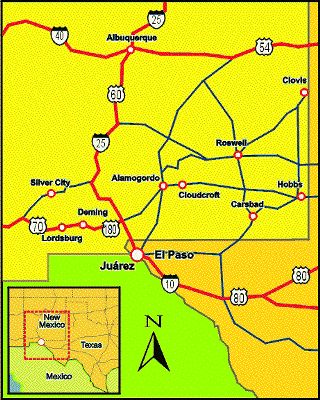