“An actor struggles to die onstage, but a puppet has to struggle to live. And in a way that’s a metaphor for life.” – Handspring Puppet Company, creator of puppets for the stage show “War Horse”

Over the weekend I had the great pleasure of joining two very dear friends and The Good Man for a night out on the town. We started at a little French restaurant for both dinner and great conversation. We lingered a bit over our food, but skipped dessert as we had tickets to the theater, and it was nearing showtime.

While I have seen quite a few stage productions in my life, I am not what one would call a “theatre geek.” All three of the other talented people at the table self-describe themselves as such, so obviously I learn a lot from them every time we are together.

On that beautiful night in San Francisco, we found ourselves at the venerable old Curran Theater with tickets in hand to see “War Horse.”

This show first came to my attention at the 2011 Tony Awards (where it picked up five awards). The brief yet enchanting moment when the puppet horse came on stage sent a jolt to my soul. I turned to The Good Man and said, “Let’s fly to New York to see it!” and he smiled, as The Good Man does, and inserted reason into my life. “I bet it will come to San Francisco. Let’s see.”

Of course he was right.

Life almost got in the way, because this past weekend was the closing of the San Francisco run of the show. Whew! I owe The Good Man so much for pulling this one together.

Now, while I love the quirky old Curran, she also makes me tired. It’s small, short on bathrooms, the seats are massively uncomfortable and it’s stifling hot inside. And yet I keep going back there because they stage some of the best shows in the world.

I went into this production with extraordinarily high expectations. They were all beat. Hand’s down.

This is the most magical and profound show I have ever witnessed.

It’s no secret that I am a horse person. I have spent time among horses. I’ve studied them. I was trained to ride by a protégé of Monty Roberts (the inspiration for “The Horse Whisperer”) and she taught us in his style.

Which is to say one must listen to a horse. You must note the posture of their ears. Understand why a foot stamp. Realize that a deep inhale or a deep exhale actually means something.

I’ve spent hours simply watching a horse so that I could hear what it was telling me.

So you know I was going to have an extraordinarily critical eye when it came to the puppetry in this show.

I’ll cut to the chase…they nailed it. I don’t know how they did it, but they did. From simple ear flicks, to a shivering coat when brushed, to head posture. At one point, there was a long dialogue between two human characters while two horses stood off to the side. The horses sighed, tipped a front hoof on edge, stamped, and shifted weight from side to side. If you’ve ever made a horse stand still you’ve seen all of those. It wasn’t affected, just simply natural.

These bits of metal and canvas transformed into actual horses in my eyes. It was absolutely magical.

And then woven around this astounding feat of puppetry was a really difficult story set during World War I.

A boy’s father wins a young horse at auction and the boy and horse embark on a deep friendship. Albert trains the horse, Joey, with ease and understanding. They have that special bond that only a horse owner can know. But when England goes to war, Joey is sold into service for the cavalry by Albert’s father. Quickly, our young Albert lies about his age and enlists so that he can find his horse and keep him safe.

It is an extraordinary journey through history, exploring many notable events of WWI.

I’ve often been told in crafting stories that there are no new plots and it is the job of the writer to find a way to bring a new perspective to a known story. In this play, the underlying story is one we know. War is awful. Ravaging. And it irrevocably changes those who were sent to the front lines.

We know that story, but when you add the majestic layer of these well wrought puppet animals, it becomes something almost cinematic. How they staged such an ambitious production on the Curran’s small stage is still a miracle to me.

From light cues to small movements to the amazing work of the puppeteers, this show transcends theatre. You willingly suspend your disbelief and don’t want it back for a single moment.

It was perhaps one of the most profound moments of live theatre I’ve ever experienced.

Now I’m sad that I waited so long to see it because I want to see it again. This despite the fact that I totally ugly cried right there in the theatre. I mean cried so hard I was afraid I couldn’t get my composure back. Thankfully I was in good company, most of the patrons shed a couple tears, too.

We were all that engaged in the story.

Whew. I was so emotionally done-in that I slept like a rock that night. Over Sunday breakfast The Good Man and I again idly discussed the show. Just trying to speak about one of the more powerful scenes in the show brought tears to the corners of my eyes.

It’s rare and beautiful to find a piece of creative work, be it a book, movie or play, that gets inside the cellular walls of your soul and hangs on. “War Horse” is that, for me.

I will be thinking about that show for a very long time and trying to find a way to see it again. 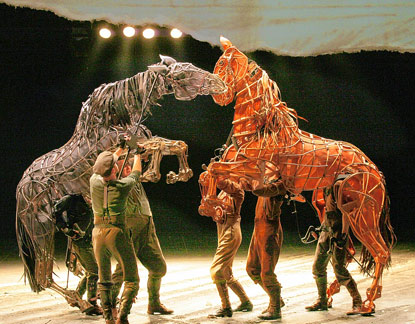 Hard to believe these mechanical devices become real horses, but they do