What it takes to rock my world

What it takes to rock my world

Last night during rush hour commute, a cable assembly on the San Francisco-Oakland Bay Bridge snapped, sending a 5,000 lb chunk of metal careening to the upper deck of the bridge.

A couple vehicles sustained some damage, and luckily, only one person was hurt. No fatalities.

This bit that broke off was part of a “fix” done over the Labor Day weekend. This is the famed S-curve I spoke of here.

As of today, Cal Trans is saying the bridge is closed “indefinitely”. Due to high winds, it may take several days for the welders to get the new piece in place.

Ugh. Since approximately 280,000 cars traverse that bridge every day, this is not a small matter.

This is, in fact, a very huge matter.

Thankfully, neither The Good Man nor I have to cross that bridge to get to work and back, so for us, you’d think, this is no big deal.

But you’d be wrong.

A major traffic hindrance like this changes the whole traffic pattern of the area. Since we live near the next bridge to the south, the San Mateo Bridge, that means much traffic will now be diverted our way so that folks can get back and forth across the Bay.

It will also affect the rest of the bridges and highways in the area. You’d be amazed the distance the ripple effect will have.

Which got me pondering how much we tend to rely on infrastructure, now, as a human race.

I mean hell, just go one day without electricity, and you remember all the little things you take for granted.

The Good Man recently had some major car troubles and was without his ride for about a week. Whoa, that really threw a kink into our lives.

Sometimes, you know…I think to myself, maybe a shotgun shack in the middle of the woods somewhere with a hole in the ground for sewer and a roaring fire, and my manual Underwood typewriter for jotting down my manifesto might not be such a bad idea.

Then I surf over to Zappos.com to look at adorable shoes and use my credit card to pay and have the UPS man put that box right in my hands and I think… 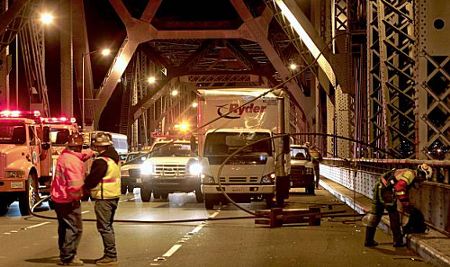