I have this fabulous little SmartDisk drive that I adore.

It has this great form factor that rocks. It’s one inch by one inch square with a little flip out arm for the USB connector.

It is twelve nice-and-roomy GB’s. I admit when I bought it, I thought 12GB was an odd size, but whatever.

Been carrying this around in my backpack for about a year now. It has all of my blog post drafts, lots of photos, a couple videos, much of my writing and various other things. I just dig this little guy.

It’s what I use at work so no personal stuff ends up on the work machine. All safely put away on a jump drive. And I can take work files home on it and not have to carry my entire laptop.

About a month ago, my Little Drive turned up missing. I was distraught. I had gone sailing out of the office late for the shuttle bus and was just sure it had fallen out of my handbag as I ran.

I was heartsick. I had made that major IT error. I had failed to back it up. It had several original files on there, including the beginnings of a new novel. I was 6,000 words into it, and sure, I could recreate, but who wants to!?

Highly depressed, I went back to the online store where Little Drive was procured only to discover they no longer make the 12GB version. The best I could do was an 8GB, so I bought one.

I was too depressed to even fire up this new drive. Unsure what to do, I soldiered on. Until I got a call from security at work . Seems they found Little Drive on the shuttle bus. I almost wept with joy. I ran over the security department and retrieved my creative soul. I immediately brought it back to my desk and backed it up to my Big Daddy firewire drive.

So, reunited, we began again, writing together, saving interesting tidbits. A letter to the editor. A draft of an entry to a local poetry contest. Yes! We were happy again, side by side.

Then there was yesterday…

For the past several days I’d had that odd back of my mind feeling that I needed to backup Little Drive. Paranoia, I think, after being parted. But when I got to work, I got out Big Daddy drive and backed Little Drive up.

Then I plugged Little Drive in and started working on some stuff.

Later, I had to attend a “lunch and learn” meeting that I’d rather have poked my eyes out than sit through…

So I decided to take my MacBook and “appear” to be working while really working on my own stuff. I had Little Drive attached to the MacBook. In a rush to get to the meeting, I hurriedly picked up my MacBook and whacked Little Drive on the underside of the shelf right above the laptop stand.

Broke the USB connector, yes I did. Well, it was connected…but hanging there by its blue and red and green and yellow wires…

I was able to gingerly plug it back in and it mounted. Yes! I pulled off the files I’d worked on that day (that didn’t make the morning backup) then I ejected the drive.

I peered into the little arm and thought “well, it’s connected, I’ll just push this back in and it will work fine.”

I’ll spare the suspense. I did and it didn’t. Meaning I fixed it but it no longer worked.

So I yanked the USB connecter back out. My “fix” had snapped off all the wires.

I pried open the cracked plastic a bit and took a look. It didn’t look good. But I thought maybe I could take it home and fiddle with it. Ok, to be fair, since I’d backed it up, there was no need to resuscitate this drive…I’m just…emotionally attached to it.

Owing to being “raised by engineers” (an honor bestowed on me by the engineering team of which I was a part of…as their financial analyst…right out of college) I figured I could figure this out.

I mean, my dad could make a toaster last for thirty years, I could fix a damn USB connector!

The Good Man suggested that even if I fixed it, odds of “data loss” were high with my kludgy fix.

Well, he needn’t have worried.

In one of those bits made for sitcoms, the more I tried to fix it, the more I broke it. I kept trying to pull the wires out a bit more. Trying to take the shielding off so I could get more space. All I did was fray the wires to unrecognizablility.

Then I thought maybe I could pop out the 12 GB drive and put it in the 8GB case! The one with the working USB connector!

After busting it wide open, I discovered that, yeah, those wires were attached to the drive in such a way as to not be easily removed.

Basically, I pulled a big ol’ Bull in a China shop on this poor little drive. It’s now in many, many pieces on my desk at home.

So the new 8GB has gotten the call to the bullpen. You’re up, fella. Let’s see what you got. 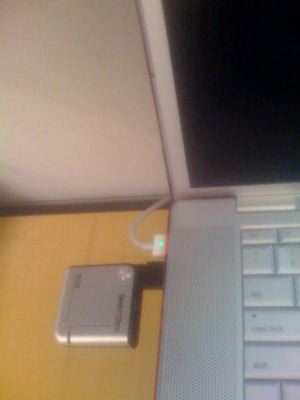