Something is wrong with the fuzzy one.

No, not The Good Man. The one that’s more fuzzy.

Something’s amiss and we can’t seem to figure out what, exactly it is.

It’s not from lack of The Feline *trying* to communicate. Oh no, she’s communicatin’

Our normally fairly quiet cat is now taken to meowing. Insistently. Incessantly. Bowl is empty, the hailstorm of meows is ceaseless. Fill the bowl, the meows stop for a while, replaced by crunch, crunch sounds. Then, when sated, the meows begin again.

They don’t sound like pain meows. Her ears aren’t hot and she’s not acting sickly.

So what’s with all the meowing?

I have heard about these devices made in Japan that will “interpret” your cat’s vocalizations.

I can’t help but think if we got one, the translations would be something like, “You people are boring. Get off the couch and hunt something! And what’s with this food? Could I *get* some of that stuff out of that can with the picture of the mermaid on the side? And while we’re at it, I need bottled water in this bowl. And this collar makes me look fat!” 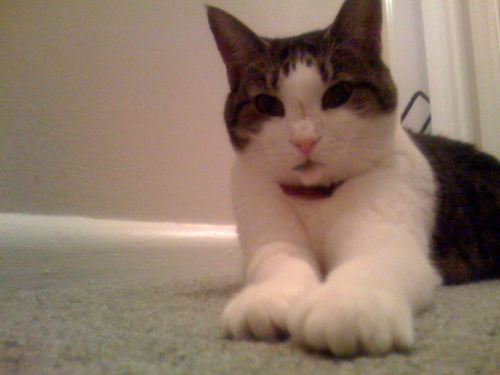