Been thinking about NewMexiKen’s observations on Twitter and Facebook, and the old fogeyism that may be alive and well.

The Good Man and I talk this topic over quite a bit and have vowed, together, that we are firmly anti-Facebook. Nope. Not going to do it. You can’t make me.

Although, making this decision, we also find ourselves in the minority of our friends and coworkers. My mother has a Facebook page for crimeny’s sake!

No, TGM and I stand together. Then I discussed it with my sister. She, too, is in the “no way, unh-uh” club.

We were starting to think it was just the three of us, but then TGM found some supporting evidence online…

From The Weekly Standard:

“…collecting Facebook friends is the equivalent of being a catlady, collecting numerous Himalayans, which you have neither the time nor the inclination to feed.”

Ouch. Ok, maybe I’m not quite as adamant as Matt Labash, who goes so far as to use the term “facetards”. But still….

I’m hoping now that the Republicans have made Twitter and Facebook cool, they will both die the painful deaths they deserve…until the next cool internet meme comes along.

Your Luddite blogger using email and *gasp*, my phone to stay in contact with my actual flesh and blood friends. 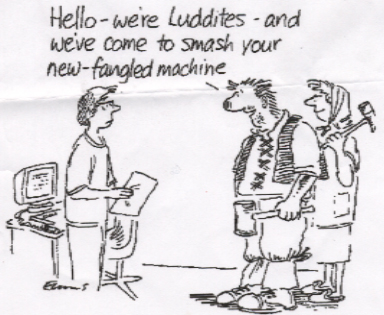