Yesterday was a weird day.

Sure, mid-December always gets a little bit dicey when going out to run errands, but yesterday was especially odd.

I had a list of things to procure and not a lot of time, so over lunchtime I started at the top of the list. First stop, Home Depot.

Oh Home Depot, I know so many people love you, but I rarely visit your orangey evil warehouse.

I needed some tools (I have a fun Christmas project for The Good Man’s little sister in progress). Since Home Depot is the Wal-Mart of hardware stores, and I wanted to spend only a little green, I decided to give it a try.

Wow, did you know there is some sort of force field going on in Home Depot? As soon as I set foot in the lumber aisle, I became invisible! It was really instant and rather startling!

The U.S. military should look into this!

The secret to a true complete invisibility shield!

A girl in the lumber aisle.

I found that on the tools aisle, I was only partly invisible. If I said, “hey, I need help!” then they could sort of see me. It wasn’t just me either, there was another woman trying to get help regarding a door knob she was considering.

She got the attention of one male employee who condescendingly answered her question then walked away…though she wasn’t done asking questions.

Oh, I did discover that in the gardening section, by the small pink canvas pruning gloves? They could see me fine.

Something about hardware and lumber.

My next errand was to go to the post office. A gift ordered online had arrived. Yay!

Well, it being mid-December and at lunch, the post office was crazy busy. We use a very small postal annex with only two employees, so that makes things an even bigger holdup.

It was a very, very long line.

Well, you know, this is to be expected this time of year.

Except for the cranky old man and the horribly cranky old woman in line behind me.

The old man kept cranking about how he can’t believe the lines and he had been there and hour before and the line was this long so he went and had lunch to wait it out and wouldn’t you know it the line is still long and how can this be!

You get my drift.

Then the lady chimed in.

“There are just too many people these days. Too. Many. People. You know why it is so crowded don’t you? Because of all the immigrants. Obama keeps letting all of those immigrants in. They all want the free stuff so those damn people keep coming in and it is just too crowded!”

Crazy old bat continued on that line of rant for a bit longer, then went back to complaining about the line. She said, “Why is there only one person working, where is that [racial epithet redacted] who works here?”

I was horrified. Absolutely stunned into a horrified shock.

Evidently the “spirit of the season” is discrimination, racism and anger.

Once I picked up my package, I got in my car and made my way out of the parking lot. As I waited to turn out into traffic, I had the audacity to wait for a group of six kids from the nearby high school walking by on lunch break.

Audacity because the evidently impatient man behind me felt I shouldn’t have paused. So he laid on the horn and yelled “GOOOO!”

Well, clearly the spirit of the season has infected me as well, because I unrolled my window and shouted “WHAT THE F–K IS YOUR PROBLEM!?!?”

Look at me pass on the season’s cheer….

I think I’ll hunker down at the house for the remainder of the year. It seems better that way. 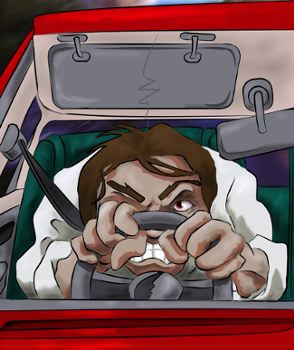