I remember as a kid, and especially a teenager, being really, really into music. I still am, but it was something most vital to me back then. An escape, a place to speak emotions and thoughts I didn’t have the words or maturity to say. It spoke to my soul.

And I remember my grandmother or mother or some adult making a comment about the music that mattered to me, and thinking, “they just don’t get it.”

I recall swearing to myself, SWEARING that I wouldn’t let there be that generation gap as I got older.

And I’ve fought it. Hard. I listen to current music. I do my best to stay up to date, so I’m at least conversant.

Yesterday, I was listening to my iPod on the way home from work, and the shuffle landed on a Rihanna song.

I like Rihanna. I like her a lot, actually. I think she’s not only stunningly beautiful, but she’s talented.

The song that came on is entitled “Unfaithful.”

In the song, the story goes that the woman is with a guy, and that it’s more than love, he is “The reason that the sky is blue.”

But gosh darn it all, she just can’t seem to stay true to him.

She cries out, “And I know that he knows I’m unfaithful/And it kills him inside/To know that I am happy with some other guy/I can see him dying.”

She then wraps up the chorus with, “I don’t wanna be…/A murderer.”

Ok, ok, this is all very emotional. Her cheating is “killing” him. He’s “dying inside” and she is the “murderer” for doing this to him.

And this is when the yawning chasm that is the generational gap became oh so apparent and the years of my experience in this thing called life kicked in.

I found myself, listening closely to the words, and then *yelling* at my stereo:

“THEN LEAVE HIM! IF THERE IS NO WAY YOU WON’T CHEAT AND IT PAINS YOU TO SEE HIM ‘DYING INSIDE’ THEN BE A GROWN UP AND WALK AWAY!!!”

Sure, I know that, “He’s a nice guy but I just can’t be true to him and so I did the mature thing and broke up with him so I could go sow my wild oats, knocking boots with everything that walks so that one day I can be a sad, bitter old hag wondering whatever happened to my life and why I never found a nice guy,” doesn’t really make for fun, emo deep pop songs.

And I’m fairly certain that the young twentysomethings that work for me would roll their eyes and think, “she just doesn’t get it.”

I think I just grew a new gray hair. 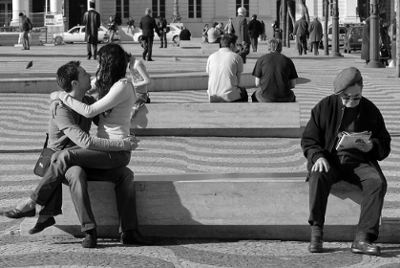