The Awards they Coulda Given Out

The Awards they Coulda Given Out

So I actually watched the Oscars last night.

What’s going on with me?

I don’t usually watch the Oscars because I believe they represent an overblown, poorly scripted Hollywood wank fest.

And I wasn’t disappointed this year.

I only saw three of the ten movies that were nominated, that being “Up,” “Up in the Air” and then yesterday afternoon, The Good Man and I took in “Crazy Heart.”

Based on those three films, here are the awards I can hand out:

Best Use of Talking Dogs – Nod goes to “Up.” Squirrel!

Best Bay Area Reference – Fenton’s Creamery gets a place of honor in “Up” and I like it. An homage to a tasty place. Good eats deserve their own award!

Best Really Incredibly Hot Chick Who Is Dancing Around the Age of 40 and Still Looks Amazing – Vera Farmiga. Hooooot in the movie “Up in the Air.” Massively HOOOOT in that red dress at the Oscars. And age appropriate for her leading man too, how ’bout them apples?

Best Pretty Young Girl Who is a Solid Talent – those crappy vampire movies notwithstanding, I think Anna Kendrick is pretty damn good. She stole the show from Clooney and made that movie worth watching, IMHO.

Best “Hey, I Can See Your Acting Skills Growing By Leaps and Bounds and I Like It” Performance – Maggie Gyllenhaal in Crazy Heart. I’ve always been a fan of hers and I think this movie shows a huge maturity in her talent. She’s amazing.

Best Realistic Repeated Barfing by an Old Guy On Film – gotta go to Jeff Bridges on that. Ew. And yet, so well done!

And the big award of the night. The one we’ve all been waiting for:

Best Use of Downtown Albuquerque as a fill in for Houston – and the award goes to….”Crazy Heart.”

I laughed pretty hard at the scene where Bad is extolling the virtues of Houston as very familiar downtown Albuquerque landmarks roll past the car windows. They didn’t even try to obfuscate the Rio Grande Credit Union sign in a key scene.

Folks, come on up and get your trophy! 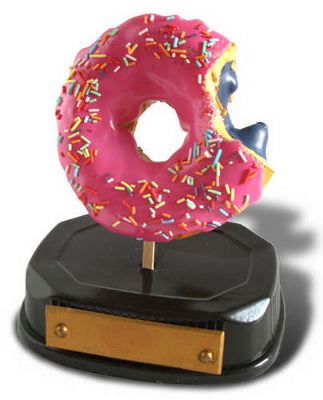