In the era of the internet, when the bar to entry is low for artists, writers, and photographers, how does one know if what they are producing is any good?

Well, one quick way to tell comes when your stuff gets, uh, how shall I say…appropriated…by a respectable institution.

Recall back on November 3, 2010, I uploaded this photo from the San Francisco Giants World Series Parade:

This is Aubrey Huff and Pat Burrell celebrating on a trolley car on Market Street at Powell: 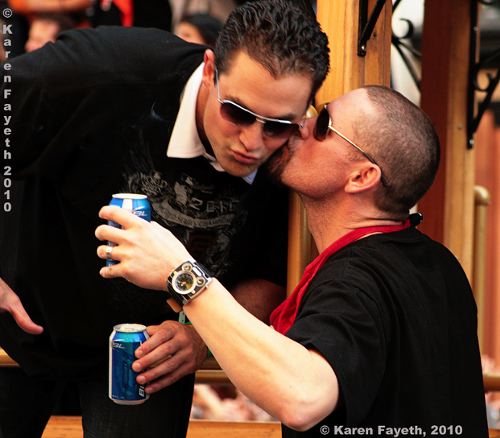 Note that I put a copyright on the photo because I had a feeling this was going to be a popular shot.

Last evening I was sitting on the couch looking through my Twitter timeline and saw that @SF_Giants (a Twitter account affiliated with the actual Giants organization) was posting some fun Valentines Cards.

And when I clicked the link for the image, I saw this:

So I was a little at a loss as to how I felt. Was I mad? Not really. I mean, in a way it’s kind of cool. Was I happy? Not really. I sure would have liked a photographer credit on a photo viewed by their almost 30,000 followers.

In the end, I decided I was just going to be sanguine about the whole deal. While it may not have my name on it, my image was blasted out from the Giants twitter account. I made a photo that was good enough for an MLB organization to borrow!

I Tweeted on my own account about how that was my photo and posted the original. Soon after, they sent me a direct message:

“Good shot! We found the picture on Google. Go Giants.”

I can’t stay mad at my favorite team.