This past weekend I had a hankering. I’m a bit depressed and no small amount of stressed out and I was in need of some comfort food. You know, the something like mom used to make.

I woke up Sunday morning with a strong hankering for Biscochitos. So I gazed over the recipe, decided on Crisco over traditional lard, looked in my liquor cabinet to see if had the requisite brandy (I didn’t) and set off to the grocer for all the goods. I already had anise seed so I was ahead of the game……

You have to understand, this was a rare bit of homemakering that I’m not used to. Neither is my long suffering, but very patient partner. But he knows he gets to enjoy the fruits of my nesting, so he’s all good.

I mixed and blended, whipped the eggs, poured the brandy (as a kid when I made them I always found a way to sample the brandy as it went in, just a small teaspoon full for me, and it always made me go “bleah! Why would anyone drink this?” As a grown up, just the smell made me “ew”, so no sampling this time…..)

Soon I had a stiff dough to work with and I cursed while rolling it out and cutting the individual cookies. As is tradition, I burned one batch (I *always* burn at least one batch while making ANY kind of cookie). But soon I’d turned out a pile of the sweet, but not too sweet, treats. I shared some with the neighbors. I ate my fill until I was sick, and then came the litmus test. My Brooklyn boyfriend gave them a nibble and declared them as addictive as I know them to be (he rocks, by the way).

So I was all up in my Biscochito bliss when I read this article in the Las Cruces Sun News.

The ice cream mix, pecans and Biscochitos, sounds divine. But what caught my eye is that I guess I somehow missed that in 1989 the New Mexico State Legislature made the Biscochito the “official state cookie”.

I *had* heard that the current plump Governor loves these same anise treats turned out by the chef at the Governor’s mansion. Wouldn’t that be great? To have someone turn out a batch of delicious just like that, whenever you want? Wow. I’d be a plump Governor too…. 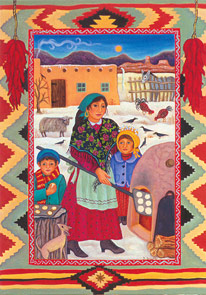