Soot of a Most Sorrowful Kind

Soot of a Most Sorrowful Kind

Over the weekend, I read on “Only in New Mexico that there had been a fire on the highest trestle bridge of the Cumbres & Toltec Scenic Railroad.

A Google search netting me an article in the Denver Post with a photograph of the fire on the Lobato Trestle that is both beautiful and heartbreaking.

The sadness immediately hit me in the heart. The Cumbres & Toltec railroad, billed as “America’s Highest & Longest Narrow Gauge Scenic Railroad,” holds a special place in my heart.

In fact, I did a post about my memories of the Cumbres & Toltec back in 2007. Looking back to that post, I rather enjoyed reading what I wrote, and I was filled with melancholy at the idea that the railroad won’t be running this summer due to the damage.

I believe that either New Mexico or Colorado, or both, will fix the bridge because the railroad is a big tourist draw. However, times are tough and money is tight. So who knows how long it might take before the Cumbres & Toltec is up and running again?

On his blog, Jim Baca was kind enough to post a couple family shots from his adventures on the Cumbres & Toltec.

Having recently semi-reorganized my rather vast pile of family photo albums, I did a dive into the memories and dug up a few photos of my own. There was a family trip back in August 1978, and I found a couple photos worth sharing.

As mentioned in my 2007 post, Captain Type A, also know as my dad, rousted us all early from our beds in the Apache pop up trailer we’d camped in the night before. I’m unclear why we were up so early, but it was, ostensibly, to go and catch the train.

Chama sits at 8,203 feet, so even on a nice day the mornings are rather chilly. Getting out of bed wasn’t the easiest of tasks that day.

I recall my dad being pretty excited and the rest of the family being…well. Um. Fairly excited?

Look at this happy group! (I’m the shortest one in the front.) 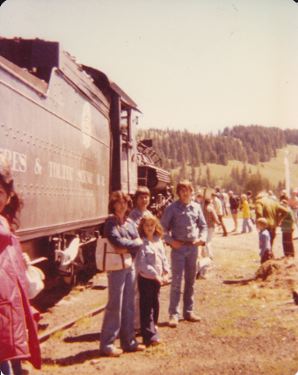 Man, is that a spouse and three kids that are LOVING the head of the household right now?

And also…helllooooooo seventies! How much denim is in that photo?

This is the station where the journey begins on the Chama side. That little figure huddled off to the right sitting on the wagon under the Chama sign is me. 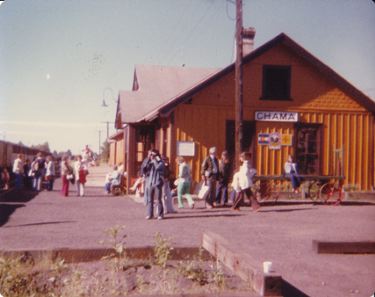 But I suppose there was a payoff. Once the sun came out and it warmed up and the train actually got moving…well heck, look at that face! 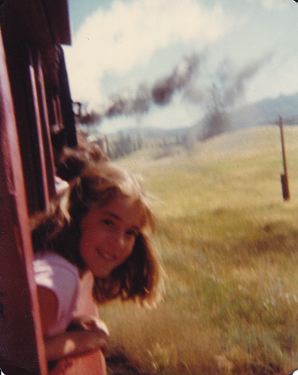 I remember really having a lot of fun once we were actually on the train. The end point of the trip, Antonito, was a charming little tourist town. I thought it was big fun since I’m a longtime lover of souvenir and tchotchke shops!

We ended the day covered in soot and ash, tired but happy. It ended up being worth it, a fun family trip, even if the beginning was a little rough.

I’d like to think that the Cumbres & Toltec will get up and running again, because there are whole legions of children who haven’t yet been tortured by their early rising father at an elevation of eight thousand feet.