Got an interesting link from The Good Man this morning. “New Mexico fights to protect the lynx” from CNN.com and same story under “U.S. Sued Over Lynx Protection” from the ABQjournal.

My first read was in passing only. Sort of a *snort*, “figures”, : shrug : kind of response you get used to being from New Mexico and being left out.

In a nutshell, a conservation and animal rights group is suing the U.S. Fish and Wildlife Service “to force it to extend Endangered Species Act protection to the Canada lynx in New Mexico.”

“The federal government lists the elusive, furry cats as threatened in 14 states— but not in New Mexico.”

“The Colorado Division of Wildlife, which has released more than 200 lynx in Colorado since 1999, tracked about 60 of the animals into New Mexico’s Taos, Rio Arriba and San Juan counties…”

Ah. So none of those wildlife “experts” at Fish and Wildlife thought that the “elusive, furry cat” would, you know, roam?

Have they MET the western region of the country? You know, wide open spaces, mountains, nice weather, lots of small furry things that a big furry thing might like to eat?

Has the Mexican Gray Wolf taught us NOTHING about how animals will roam when looking for viable food sources?

So what’s kind of head shaking about the story is that if the “elusive, furry cat” is in Colorado, it is totally protected under the Endangered Species Act. Once it crosses over into New Mexico? Open season.

No one tell Neal Trujillo that, ok? Cimarron isn’t all that far from the Colorado border… 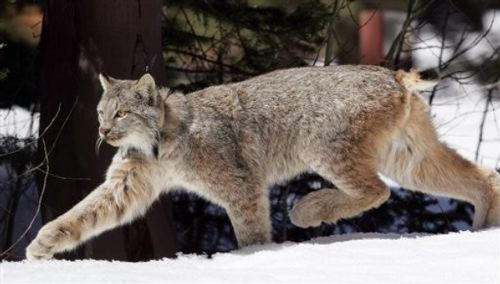