Question is, which sort of person are you?

Question is, which sort of person are you?

Last night, The Good Man and I went to the home opener for the San Jose Giants single A baseball team.

I do love minor league baseball. Just thought I’d throw that in.

We got to our seats, got settled in and soon heard, “ladies and gentleman, please rise and remove your caps as we present our national anthem.”

It’s how every baseball game begins. It is ritual.

So quickly this adorable young lady (maybe all of fourteen years old) came out of the home dugout and hit her mark and dived right into the oh-say-can-you-see part of our show.

As she does, I notice that three rows ahead, a gruff man with a gray beard, a Bud in hand, and a mustard stained sweatshirt is singing along. The years of cigarette smoking have made his voice less than melodic, but he doesn’t lack enthusiasm.

Fair enough. He’s the kind of guy who likes to sing along.

At the seventh inning stretch, Colonel Mustard with a Budweiser also belted out a hearty rendition of “God Bless America” which then let him straight to an even more enthusiastic singing of, “Take Me Out To The Ballgame.”

Hey, you know, it’s all a part of the experience.

Some guys like to sing along. Some guys don’t.

Me, I usually let the Star Spangled go by. I can’t hit those notes. Sometimes, if I’m feeling especially patriotic, I’ll get into a version of “God Bless America”.

But I always, always sing “Take Me Out…” For me, it’s mandatory.

No, I don’t understand that logic either.

Anyhow, so last night as I sang along, out of tune, I got to thinking about folks at the yard. Seems to me, there are two kinds. Them that sing along, and them that don’t.

Question is…which sort of person are you?

I guess I’d be called a partial singer-alonger.

Anyhoo, when all was said and done last night, after battling from an 8-0 deficit, the hometown nine still lost 9-7. Boo. Go get ’em next time, boys.

As an aside: This year we sat in a different section than usual. In our regular seats, there is a gentleman we know well who also likes to sing along to the Star Spangled. The thing is, he’s part of a local men’s choir and has the voice of an angel. It’s always rather nice to hear him sing. And I’m rather intimidated to try to sing along with him, to be honest.

I felt much better harmonizing with the guy who was six beers and four hotdogs into the night. 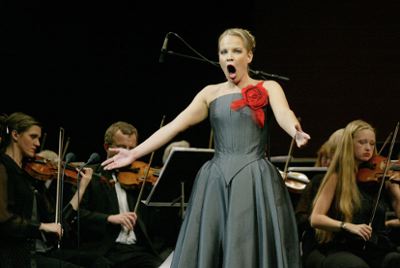 (Man, I couldn’t be more excited to use this photo again.)

Image is of Latvian mezzo-soprano Elina Garanca and a pretty extensive web search could not net me the attribution on this photo. I found photos from that same event on the European Commission page which allows for the use of photos with attribution.