So I’ve been having trouble sleeping. Don’t know why. I got stuff on my mind, but no more than the usual suspects.

It’s not waking up and worrying or thinking or whatever.

It’s just waking up. And then not going back to sleep.

Exhausted, looking for some help, I decided I’d try some of that over the counter Tylenol PM.

Well, The Good Man astutely pointed out that Tylenol PM is just a mix of Tylenol and diphenhydramine, you know…Benedryl?

I already have Tylenol, so I bought a generic bottle of Benedryl.

Hoping for some quality rest, I followed the exact same doses from the Tylenol PM bottle, mixed up the recipe, swallowed it, then lay down in my bed.

It didn’t take long before my head felt kind of thick and my eyes got heavy.

Awesome! Sleep is on the way!

In one dream, a carload of my friends and I drove over the Golden Gate Bride, but on the OUTSIDE of the asphalt roadway. We sort of floated alongside the bridge, over the water, as we cruised. I was in the passenger seat and I could see the bridge up close. It was the most amazing way to see the entire bridge.

In another I shook hands with Jesse Jackson because he saw me across the room and rushed over to meet me. Said he was a big fan. (not sure what corner of my psyche that came from. I’m not much of a Jesse Jackson person, but ok.)

In several I could run really fast and it felt so good.

In the best dream, turns out The Good Man could fly. If I held tight to his hand, I could fly too. He flew *fast*, we zipped all over, and the wind tugged at my shoes! It was awesome!

Wowowowowow maaaaaaahn. That is some freaky sh–! I had good sleep! Fabulous dreams! And clear sinuses!

Diphenhydramine! You can’t beat this stuff!

So you know what I did, right?

I took it again the next night.

Once again, I woke up feeling great. No residual antihistamine hangover, just calm and happy and best of all, rested.

So then, of course, owing to my Catholic upbringing or something, I realized that anything that feels that good can’t possibly be good for me, right?

So I put the happy dreams away and tried to sleep on my own last night.

You know, I had a few dreams. Nothing special. Very dull. No flying or anything. 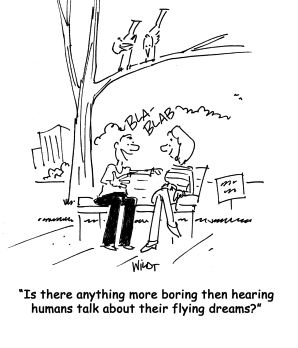